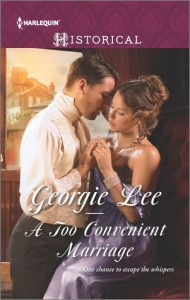 Late one night, Susanna Lambert, the illegitimate daughter of the Duke of Rockland, bursts uninvited into a stranger's carriage, turning both their worlds upside down. Suddenly, fun-loving Justin Connor finds himself forced to consider marriage!

For Susanna, marrying Justin is a chance to finally escape her cruel stepmother and forget about the rake who ruined her. But as wedding bells begin to chime, Susanna discovers she's carrying a huge secret…one that could turn to dust all promises of happiness as Justin's wife!

Susanna is the illegitimate daughter of a Duke and wants nothing more than to get out of his house! She was raised by her mother who loved her dearly and never hesitated to show her. Her maternal grandmother was also quite loving. Everyone else in her life – was disdainful and mean. Once her mother died, Susanna moved to her father’s house with his wife and 2 children and was treated like a piece of furniture only with more disdain. When Susanna suddenly meets Justin Connor she sees a way out. She can marry him and they can have a marriage of convenience. She may not get the love and family she’s always wanted but she wouldn’t have to live with her step-family any longer.

Justin is trying to start a business as a wine merchant and he sees an attachment to the Duke of Rockland as a good thing. He is under the impression that marrying Susanna will get him connections through her father so he accepts the terms of the marriage contract and marries her. Of course he doesn’t realize that Susanna is already pregnant by another man when he does so. Susanna had tried to tell him before the wedding but Justin didn’t want to hear about any other men.

As the marriage goes on they get the business off of the ground and do well. They also fall in love and have a wonderful marriage – that is until Justin finds out about the pregnancy and is so angry the marriage might be done for good.

I know that secret babies are always a good story trope but I can’t say that I love when the people are together and the woman doesn’t tell the man. I mean, yes, when she tried to tell him he told her he didn’t want to hear about any other man, but come on! She should have spit it out at some point. Did she think he’d never know? Really? Ugh. Of course once Justin found out I didn’t particular care for the way he handled things. He realized that he had told her he didn’t want to know but that didn’t make him happier. I guess their love was too new but frankly if you love someone you should love them unconditionally.

Now, that being said, I liked the rest of the book. Yes, things happened quickly and it was a fast moving story but it was engaging. The author also made me feel sad for Susanna’s predicament prior to marrying Justin and despite Justin’s douchiness after the pregnancy discovery I really liked him. Yes, he may have gone into the marriage for all the wrong reasons but he did try his best with Susanna and because of that found the love of his life.

The story kept my attention and was a great marriage of convenience/secret baby book.

Guest Review: The Cinderella Governess b