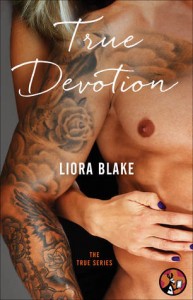 Find out if rock sensation Simon can break through tough-girl Devon’s steely exterior—if he can keep his head on straight, that is—in this second sizzling romance in the True series!

Devon Jenkins is a feisty blonde, and Simon Cole is the arrogant, sexy guitarist playing in her brother’s band. When they met for the first time, it went something like this: He hit on her, she shot him down, he made a lewd joke, she told him he was an idiot.

In the two years since then, not much has changed. From the way Simon flirts shamelessly with any set of ovaries within a 100-mile radius, Devon knows the smartest thing she can do is keep an impenetrable wall between them.

But sometimes the smart choice isn’t necessarily the right one…

Devon Jenkins brother is a rock star. She’s around musicians a lot because of who her brother is and one of those musicians is Simon Cole. Simon Cole is a rich playboy who flirts with anything in a skirt and is in Trevor’s band. One of the girls that he flirts with all the time is Devon Jenkins. They have a love to bicker relationship but he’s not on Devon’s radar…like that. At least she thought he wasn’t, until he is and she can’t get him out of her mind.

Simon has noticed Devon since the first time he set eyes on her and after two years of bickering with her over every little thing, he’s still noticing her. It’s not to be though because she’s one of the few girls who hasn’t fell for his charming personality but at Trevor and Kate’s wedding, things start looking up for Simon because a very drunk Devon is finally noticing Simon…like that. Too bad she’s drunk because Simon doesn’t want Devon for one night. He wants her for a whole lot of nights and he won’t be the guy she regrets having sex with in the morning and drunken wedding sex with him is something she’s going to regret so after taking care of her that night, he walks away.

Devon tries to move on from Simon’s rejection and forget about the whole thing but the guy is everywhere! It’s getting harder and harder to ignore how much she wants him when he keeps showing up everywhere she goes and before she knows whats what, she gets a taste and she can’t stay away.

Holy crap did Simon win me over in this book. There was not one thing about him that I didn’t absolutely love. From his flirty personality to the charity work that he did to honor his Mom to that first gift he gave Devon…he was everything.

Devon was a good heroine but there were times when her hot and cold attitude toward Simon got on my nerves. I’m glad that once she decided that she was all in with Simon, she never strayed from that. I just thought it took her a while to finally get there and it was disappointing because she hurt my Simon.

Simon was my favorite hero in the whole series, I loved him so much. I loved how giving he was, how in he was with Devon. I loved how upfront he was with everyone about how much he liked Devon. When we find out about the way he was with Devon’s best friend, my heart melted. I could go on and on about my love for Simon Cole but I’m sure you get the idea. He was great. I freaking loved him and if you want to love him too, you should read this book. It’s good, I promise!