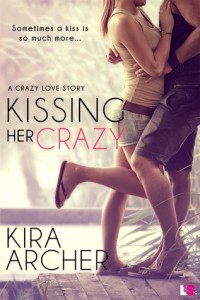 Sometimes a kiss is so much more...

Single mom Lena Oserkowski just wants to relax at the 5-star resort where her brother is getting married. Oh, and figure out how to make one of her businesses successful enough to support her son. Her focus is thrown out of whack when Elliot Debusshere, twin brother of her new sister-in-law, swims to her rescue at the hotel pool.

Elliot is disillusioned with his wealthy, playboy lifestyle and wants nothing more than to bring some meaning and purpose to the charity he runs. When he rescues Lena from a case of heat exhaustion and meets her son Tyler, he has no idea the answer to his problems might have just fallen in his lap. Literally.

With Lena's ideas and Elliot's know-how, they might just be able to make their ventures a success. Except pleasure has a sneaky way of mixing with their business, leaving both dazed and confused. Charming as he is, Elliot isn't father material. And there's no room for a single mom and her child in his life. While the attraction between them isn't easily squashed, there's no telling the lengths his family will go to prevent a relationship.

Lena Oserkowski is a struggling single Mom and Elliot Debusshere is a playboy who wants to do more with his life and his work. They meet at the hotel resort where their siblings are getting married. Yep. Lena’s brother is marrying Elliot’s sister. Lena has a fear of swimming and Elliot comes to her rescue at the resort pool. When Lena passes out, Elliot takes her and her young son to recuperate in his hotel room. He didn’t know what else to do with her but when he figures out who she is, he sets her up in his bed and waits for her to wake up. While she’s passed out, he gets acquainted with her young son Tyler.

I don’t know, if I were to panic and then black out and wake up to find out that my sister-in-laws twin brother rescued me then took care of not only me, but my son as well…I would say thank you for everything you did. I would not judge the guy for feeding my son junk. I would not make a big deal of the guy playing video games with my son.

I would say thank you.

Lena, on the other hand? She comes off as snooty and judgmental because she does bring all of this up. Oh, she’s thankful to him for everything but I don’t know, I didn’t like how she wakes up and is so worried about her son, finds him to be okay and safe and then she brings up all of the things she wouldn’t or doesn’t do with her son.

If I was Elliot, I would have been like….

Over the course of the book, we see Lena and Elliot get closer and closer. Lena has a whole lot of business ideas but no real way to bring them to life. Elliot has the means to bring those ideas to life but lacks the ideas himself so they work together. With Lena’s ideas and Elliot’s financing, what else do you need?

This book wasn’t some long, drawn out romance but really short and sweet. I didn’t take to Lena at first but she came around for me. I liked seeing her with her son and seeing her do her thing and not give one hoot what anyone thought. I liked the romance between her and Elliot and I enjoyed the chemistry that was evident from the first with these two. There were times when the story dragged and when I wanted to strangle Elliot’s parents but overall, this was a solid read.