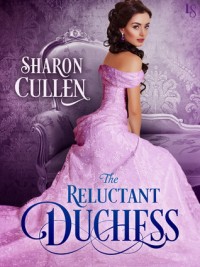 Lady Sara Emerson was jolted out of her dull provincial life by her cousin’s murder. Now that the killer seems to be targeting her, Sara seeks help from the man who was once her cousin’s fiancé, Gabriel Ferguson, Duke of Rossmoyne. With his towering frame and fiery personality, Ross cuts an intimidating figure. Living under his protection, however, has its own hazards—like the sudden urge Sara feels to take their relationship in new, exquisitely inappropriate directions.

Dazzled by the social graces of his betrothed, Ross never noticed her shy, blushing cousin. Looking at Sara now, though, he’s drawn to her lovely eyes and calm disposition. Funny how a year away from the hustle and bustle of the ton changes a man. But Ross has no intention of allowing a woman to interfere with his plan to return overseas. He will simply capture the murderer and set sail once again. The problem is, with her beguiling lips and heavenly touch, Sara makes him never want to leave home—or his bed—again.

Two years ago Sara Emerson’s cousin, Meredith, was horribly murdered. Now Sara is receiving troubling letters and she’s gone to the only place she could think of – the Duke of Rossmoyne’s home. Rossmoyne was Meredith’s betrothed at the time of the murder and at the funeral he told Sara and her family that if they ever needed anything that they just had to ask. Sara heads to London to seek his assistance as she’s not sure what the letters mean. He has just arrived back from India after a year away and isn’t thrilled to be digging up old memories of Meredith. When he finds out that Sara has received one of the letters – a more threatening one – at the hotel she’s staying at in London Ross insists that she stay at his home while she’s in London (as his mother is in residence and can act as chaperone).

Sara, despite her worry over the letters, finds herself more intrigued by Ross by the day. He seems like a different person than the one that was due to marry her cousin. They spend evenings in his study talking about all sorts of things and she looks forward to that quiet time. She doesn’t want to admit to herself that she’s falling in love with Ross.

Ross was so enamored with Meredith that he never really noticed Sara – she was always in the shadows. Now that his focus is solely on her he can’t believe that he never realized how beautiful she is. As he spends more time with her he starts falling for her but when he tells her of his feelings she is almost dismissive. She believes her place is with her father because he can’t take care of himself and hasn’t since Meredith’s death (her “father” is actually her uncle, Meredith’s father, who raised Sara after her parents’ death). Between Sara’s reluctance and the ever-darkening threats from the unknown source, Ross isn’t sure he’ll ever be able to talk Sara into being his duchess.

I found Ross to be a good man. He hadn’t always been but after Meredith’s death he took a good hard look at himself and didn’t like what he saw. After the grieving period, when it was time to return to society, he headed off to be a diplomat. Between his own revelations and his experiences in India he had changed and with Sara he liked who he was. I really enjoyed his character overall.

Sara was a spinster who believed that her place was at her father’s side. After her parents died and her aunt and uncle raised her she felt obligated but she also loved them dearly. After Meredith’s death her mother had taken off for Bath and had never returned. Between keeping her absent-minded father eating and taking care of himself it was a full time job. Of course she’d fallen in love with Ross but she didn’t honestly believe that she belonged in the ton or that he could truly love her. I didn’t care for her lack of self-esteem when it came to Ross. She was a strong character otherwise and insisted on being in on the investigation of the letters and wouldn’t back down. But when it came to her love life she shied away and it was a bit disconcerting to have two such varied parts of her personality at work. I was quite happy when she finally gave in to him but it took a long time.

The Reluctant Duchess was a sweet romance that had a nice level of intrigue thrown in. I liked the blend of romance and mystery that was interwoven into the story and thought the author did a great job of balancing the two.