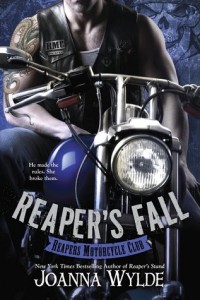 The New York Times bestselling author of Reaper’s Stand is back in her “uber-alpha rough world of MCs”* as one woman’s future is rocked by the man whose hardcore past could destroy her…He never meant to hurt her. Levi “Painter” Brooks was nothing before he joined the Reapers motorcycle club. The day he patched in, they became his brothers and his life. All they asked in return was a strong arm and unconditional loyalty—a loyalty that’s tested when he’s caught and sentenced to prison for a crime committed on their behalf.

Melanie Tucker may have had a rough start, but along the way she’s learned to fight for her future. She’s escaped from hell and started a new life, yet every night she dreams of a biker whose touch she can’t forget. It all started out so innocently—just a series of letters to a lonely man in prison. Friendly. Harmless. Safe.

Now Painter Brooks is coming home… and Melanie’s about to learn that there’s no room for innocence in the Reapers MC.

Painter has been in prison for the last 18 months and during that time he’s done nothing but think of Melanie Tucker. Yes, he wants to bend her over…anything and fuck her senseless but he also has an attachment to her that he never expected. They’ve been writing letters back and forth almost the whole time he’s been in prison and she’s the first person he wants to see when he gets out. He knows he’s not good for her, however, as he never sticks with a woman more than a week so when he does get out he avoids her. This lasts only so long and then he just can’t help himself.

Melanie has had it bad for Painter since she met him right after her friend London’s house exploded (Reaper’s Stand). She was so excited for him to get out but when he ignores her she’s pretty upset. She decides to blow him off and attends a party at the armory where the Reapers have their clubhouse. She attaches herself to a Devil’s Jack but soon Painter intervenes. While they get a little busy on the side of the clubhouse he soon took her home to keep her safe from harm – even from him.

Melanie and Painter go through a lot of back and forth but soon they’re together in every way. Painter is ready to make the big commitment of making her his old lady but Melanie is now opposed to staying with him as she knows she’ll never come first in his life – the club will. When Painter takes risks that could get him thrown back in prison right after she tells him she’s pregnant, Mel’s done. Painter’s not sure he can ever get her back but he’s not gonna stop trying.

Throughout the series Painter has been one of the characters that I wanted to read about. He has an electric personality and it never ceased to capture my attention. When he finally set his sights on Mel I was pretty happy that he was gonna finally settle down with one woman as I knew he needed that stability in his life.

I really liked the issue in this book that had Mel staying away from Painter because of the MC. I like the MC (obviously) but I could truly understand Mel’s hesitance to trust that Painter would be there for her when she needed him. The club was his family but it took a long time to see that, and that it could be hers as well. I did feel she was being pig-headed and too stubbornly obstinate at times but she had her daughter to think of and I respected that. I still wanted her to be with Painter. 🙂

The book spans a period of 5 years and I loved going back to the beginning and seeing the story from both of their POV’s. As usual Wylde has given us a badass MC book and a great romance. I like that Wylde doesn’t try to make her MC members act all flowery when they’re with their women. They are who they are and while the men truly love their women they don’t change for them. It makes for a great read. I can’t wait to read Gage’s story next.