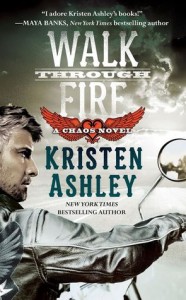 Millie Cross knows what it’s like to burn for someone. She was young and wild and he was fierce and even wilder-a Chaos biker who made her heart pound. They fell in love at first sight and life was good, until she learned she couldn’t be the woman he needed and made it so he had no choice but to walk away. Twenty years later, Millie’s chance run-in with her old flame sparks a desire she just can’t ignore. And this time, she won’t let him ride off . . .

Bad boy Logan “High” Judd has seen his share of troubles with the law. Yet it was a beautiful woman who broke him. After ending a loveless marriage, High is shocked when his true love walks back into his life. Millie is still gorgeous, but she’s just a ghost of her former self. High’s intrigued at the change, but her betrayal cut him deep-and he doesn’t want to get burned again. As High sinks into meting out vengeance for Millie’s betrayal, he’ll break all over again when he realizes just how Millie walked through fire for her man . . .

When Millie was just 18 years old she met Logan at a party. He was direct and immediately asked her out on a date. She accepted and from that point on they were inseparable – staying together for the next three years. Millie then, out of the blue, told Logan what she truly felt about bikers and he walked away. She really didn’t feel that way but was trying to get Logan to walk away and he did.

It’s now 20 years later and Millie happens to see Logan in a Chipotle. She runs at that time but when she thinks about it she feels she needs to come clean about what exactly happened 20 years ago. She ends up at a bike rally but when she runs into Logan they end up going back to his RV to fuck before she can tell him anything. When they’re done – before she can even catch her breath – he kicks her out and she realizes that treating her like shit is his way of getting back at her. Unfortunately Millie and Logan continue this horrid treatment of each other for the next couple of weeks until Millie finally breaks down and tells Logan what the real reasons for their break up were. When he finds out he’s upset that he didn’t find out the reasons back then but it changes everything and soon Millie and Logan are back to being the lovebirds they once were.

Logan was married for 13 years and has two daughters that he wants Millie to meet. They are 12 and 10 years old and taking the divorce pretty hard but he knows they’re sweet girls and will accept Millie. One of them does but the other wants nothing to do with her and creates problems. On top of that an enemy of the Chaos MC starts to go after Millie and Logan’s not happy about it.

The first part of the book was really good. I didn’t like the games that Millie and Logan were playing with each other but I understood and was pulling for them. They pretty much resolved their relationship by about the 45% mark in the book. The rest, imho, was just filler. The issues with Benito Valenzuela and Logan’s daughters were interesting but truly not integral to the story. If the story would have ended at the 50% mark in the book I would have thought this was a great short novel.

Logan is the typical alpha hero in Ashley’s books. Protective and possessive which is never a bad thing. He talks like all the other bikers in Chaos which is annoying but tolerable. He gave a lot of mini speeches throughout the book that made him seem “oh so wise” snort and those got old but he was a good guy overall.

Millie is a broken woman at the beginning but comes into her own throughout the book. She, unfortunately also talked like a Chaos biker and that annoyed the hell out of me. In fact every single character in the book talked like a Chaos biker and quite frankly I’m not sure how Millie or anyone else ran a successful business talking like that. I found it incredibly frustrating that every character sounded the same to me!

In the end while I liked the book I didn’t love it by any means. I love the men of the Chaos MC and how they welcomed Millie back in to the fold after believing her to be a complete bitch for the past 20 years. They realized their mistake – which was a completely understandable one – and admitted it. Ya gotta love that. I will be reading the next book in the series because come on, it’s Chaos!