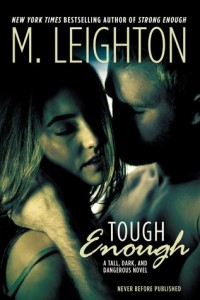 There was a time when I had everything–a wonderful family, a bright future. Love. But all that was taken away in a single night, torn from me like flesh from bone. Since then, I’ve hidden away in my second-choice job as a makeup artist. But I prefer it that way, actually. I’m comfortable in the shadows, where no one can see my scars.

Kiefer Rogan literally took my breath away the moment I met him. MMA champion-turned-actor, notorious playboy, charming to a fault—he’s everything I vowed to avoid.

But he just wouldn’t stop until I opened up and let him in. Maybe I should’ve tried harder to resist him. Maybe I shouldn’t have fallen in love with him. Because I, of all people, know that everyone has secrets. Scars. And that they’re usually ugly and painful and destructive to the people we love most.

I just never guessed that they could be deadly, too.

Katie is a make-up artist at a studio in the small town of Enchantment, Georgia. She likes what she does and is quite happy to just do her job, come home and watch The Walking Dead, and watch her narcoleptic cat sleep. That’s her life and she enjoys it until Kiefer Rogan comes strolling through the door. He is an MMA fighter who is filming at the studio she works at. She does his make-up every day and every day he surprises her with coffee and a new treat. He is smitten from the first time he sees her but Katie is a tough nut to crack and he’s not sure he can get through to her.

Rogan had a rough time growing up but now he can take care of himself. He also takes care of his brother who was paralyzed from the waist down in Afghanistan. He knows he shouldn’t start anything with Katie because he’ll eventually stop shooting and go back to Texas but he can’t help himself. When he finds out about the secret that keeps Katie to herself he doesn’t care – that is until he finds out who was behind it all and that that person is now trying to ruin both his and Katie’s lives once again.

This was a sweet story that I really enjoyed. I loved Katie and her quiet personality. From what we as readers understand she’s quite different than who she used to be 5 years prior when her life changed dramatically. I didn’t get to know that Katie but the one in this story won my heart. Some might look at her as a shrinking violet but I saw a woman who was determined to live life on her terms and I loved that. She was smitten with Rogan from minute one but knew she shouldn’t get involved with him. He kept pecking at her resolve, however, and she finally gave in. What she found was a love to last but unfortunately most love stories have their issues and this was no different. The issues in this story, and how Rogan and Katie’s lives intersected without even knowing about it, was a bit far-fetched but it worked.

Rogan was a great guy and I loved that he was so taken with Katie from the get go. He didn’t try to hide his feelings and I loved that. Though his brother didn’t treat him well he still took time and energy to take care of him and yeah, he had his moments with bad thoughts he still persevered.

The villains in this story were true villains and I was happy that they got what they deserved in the end. It happened really quickly and off page which I didn’t care for but I guess it got the job done in the end so it was all good.

Overall I found the book to be sweet with a bit of a dark element that made it that much more interesting. I didn’t read book 1 so was slight lost when Rogan was talking about his past and his buddies and their problems but it didn’t affect the book all that much so was still good.