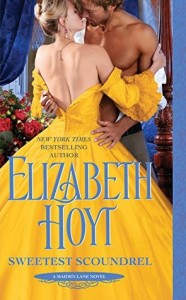 Prim, proper, and thrifty, Eve Dinwoody is all business when it comes to protecting her brother's investment. But when she agrees to control the purse strings of London's premier pleasure garden, Harte's Folly, she finds herself butting heads with an infuriating scoundrel who can't be controlled.

Bawdy and bold, Asa Makepeace doesn't have time for a penny-pinching prude like Eve. As the garden's larger-than-life owner, he's already dealing with self-centered sopranos and temperamental tenors. He's not about to let an aristocratic woman boss him around . . . no matter how enticing she is.

BUT LOVE CONQUERS ALL

In spite of her lack of theatrical experience—and her fiery clashes with Asa—Eve is determined to turn Harte's Folly into a smashing success. But the harder she tries to manage the stubborn rake, the harder it is to ignore his seductive charm and raw magnetism. There's no denying the smoldering fire between them—and trying to put it out would be the greatest folly of all.

Eve Dinwoody is the illegitimate sister of the Duke of Montgomery, and is his “man” of business as well. She’s holding the purse strings to her brother’s investment into the reconstruction of Harte’s Folly and Eve isn’t thrilled with Mr. Harte and the money he’s been – at least to her thoughts – spending recklessly.

When Eve first confronts Harte he is in dishabille with the woman hired to sing in the opera on opening night at Harte’s Folly. She’s not taken with the man at all but when he shows her the garden and is so very passionate about it she starts to see a different person. Mr. Harte, who’s real name is Asa Makepeace, lives for the theatre. He loves it so much that he became disowned by his father because of it. He lives, eats and breathes the Folly and won’t allow Eve to cut off his funds. Eve agrees, because of her brother’s goading, to contin ue to supply Asa with funds but strange things start happening around the garden and lives get put into danger.

Asa gets to know Eve and the more he’s around her the more he likes her. He doesn’t understand his feelings but he’s not a stupid man and isn’t willing to question them too deeply. He knows he wants her but even he can’t predict how much he’ll end up caring for the lady.

This was a wonderful story. I have long waited for Asa’s story and reading about Eve in the last book piqued my interest even more. I love this pairing as it was just so very unlikely!

Eve, though she has some emotional scarring from her past deals with Asa beautifully. She pushes him to levels he didn’t think anyone could and is happy to do it for her. She, at first, can’t stand for any man to touch her other than her bodyguard but soon Asa has gotten under her skin and she’s enjoying his touch.

The story is a bit suspenseful and very sexy – as I find all of Elizabeth Hoyt’s books – and that’s a definite plus in my book. I am intrigued by the Duke of Montgomery and what he’s up to, that’s for sure.

It was great to see the other members of the Makepeace family in this story as well and catch up with them a bit. It wasn’t for long but just enough that it made me want to go back and start the series over again.

I found Sweetest Scoundrel to be a great addition to the Maiden Lane series and can’t wait for the next book!