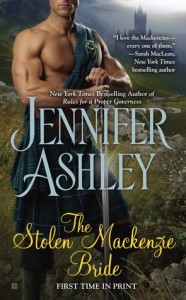 1745, Scotland: The youngest son of the scandalous Mackenzie family, Malcolm is considered too wild to tame…until he meets a woman who is too unattainable to resist.

Lady Mary Lennox is English, her father highly loyal to the king, and promised to another Englishman. But despite it being forbidden to speak to Malcolm, Lady Mary is fascinated by the Scotsman, and stolen moments together lead to a passion greater than she’d ever dreamed of finding.

When fighting breaks out between the Highlanders and the King’s army, their plans to elope are thwarted, and it will take all of Malcolm’s daring as a Scottish warrior to survive the battle and steal a wife out from under the noses of the English.

Malcolm Mackenzie first sees Lady Mary Lennox at a ball and is smitten from the first look. Once he talks to her he knows that this is the woman for him and nothing will change his mind. He finds out that Mary’s sister, Audrey, is in love with a man that her father doesn’t approve of. It’s not a wealthy or political enough match so he rejects it. Malcolm uses Jeremy to get closer to Mary and in the meantime he makes plans to help Audrey and Jeremy get married and be together. The problem is that while all of this is happening Charles Stuart (sometimes knows as Bonnie Prince Charlie) heads into Edinburgh to take over and become king as he believes is his right. The English king kind of has an issue with that and understandably fights back.

Malcolm is a man who loves his family. He doesn’t necessarily understand them all the time but he loves them nonetheless. His oldest brother Duncan is riding with the Jacobites in support of Charles Stuart and trying to get anyone and everyone behind the cause. Malcolm is neutral but he doesn’t want Duncan involved or hurt in any way. Easier said than done. Then there’s his brother Will who’s a spy, his brother Alec who is an artist, and Alec’s twin Angus who we don’t know too much about but is supposedly his father’s favorite. Malcolm, while trying to help Audrey and Jeremy and woo Mary must try to take care of all his brothers when the shit hits the fan.

The whole family ends up at the family seat in the highlands, Kilmorgan, along with Mary and her father. Her father softens towards the family and Mary and Mal fall deeper in love. Unfortunately life has the knack of getting in the way of happiness and the Jacobite rising and ensuing battle tries to tear not only Mal’s family apart but tear him from Mary as well.

This was a really great book, I must say. I loved the interweaving of the romance, the family element and the events that no one in the Highlands could ignore in 1745 and 1746.

The romance was so very sweet. Was it all tea and crumpets? No, definitely not. Mary and Mal were a pair that were perfect for each other. Mal knew how to make trouble for people and he taught Mary well. He loved her so much though and he never hesitated to show her how he felt in thought, word and deed. Mary was wonderful as well and such a strong female. She was just the right woman for Mal and was as in love with him as he was with her. The story, at times, broke my heart but was so good I couldn’t stop reading.

The Mackenzie family was a tough one that had 5 strong bullheaded men in it. Make that 6 when you include the Duke – he was almost more bullheaded than all the others put together. Despite all of their differences though I could tell how much they cared for each other. Ashley did a great job of getting that across to the reader and I never doubted that they would protect and die for each other if needed.

The events of the times were sad. The Jacobite rising in 1745 ended with a battle in 1746 and the total number of men, mostly highlanders, that died at the Battle of Culloden is seriously heartbreaking. Ashley put us right in the face of the battle and did an excellent job of making it seem oh so real. I’m happy I wasn’t there, but I was pleased with the end of the book and how things turned out in the end for the Mackenzie family.

This story can be read before any of the other Mackenzie books as it’s set almost 130 years prior to those books. It’s a great book and definitely worth reading. I don’t think you’ll be disappointed.