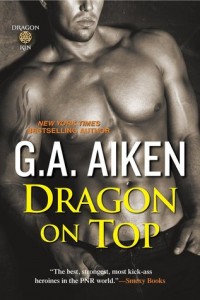 I am Glheanna the Decimator. I am a warrior. A soldier. I know no fear. No pain. No mercy. I do, however, know acute embarrassment! How could I not after getting dumped by a bastard dragon in front of my own troops? So I tuck tail and return to my cave, drowning my sorrows in ale—as is my family’s way. But instead of leaving me to my misery, I’ve been summoned to the Dragon Queen’s court.

As if my life wasn’t pathetic enough, Her Majesty now has me escorting the highborn Bram the Merciful through dangerous territories—not exactly the best use of my military training. And just so he can negotiate with enemy dragons instead of battling them? Honestly, what has my world come to? Then again…Bram is quite easy on the eyes. And the perfect distraction for what ails me. Perhaps I’m looking at all this the wrong way. Maybe there is a place for a little “mercy” in my life…

Bram the Merciful is a peacemaker and has been in love with Ghleanna for years – maybe even a half a century. She apparently doesn’t know he’s alive but she’s been assigned to protect him on his journey to secure a true with the Sand Dragons. She takes along her brothers Cai, Hew, Adain and Addolgar. While on the way they are set upon and Ghleanna is hurt. When Bram tries to save her he finds he has no choice to be to seek refuge from the Sea Dragons – the ocean being a place he swore he’d never go again.

Bram and Ghleanna are required to stay under the water for a time and they each have their own tasks to occupy their time – Bram with creating a truce between Rhiannon and the Sea Dragon empress, Helena – and Ghleanna training warriors and creating a revolution. 🙂 But the best thing that they have to do is each other. Bram finally gets Ghleanna to see him for the man he is and once that happens there’s not stopping them for being all over each other.

This novella was just fun! I love this series to death because it’s such a wonderful blend of fun, funny, sarcastic, sexy, brutal and the dragon’s own form of romance. Aiken’s books never fail to leave me with a smile, that’s for sure.

In this story we had two very opposite people. A tough female warrior who would almost rather strike first and talk later and a peacemaker. You wouldn’t think that these two would work out but they have own way of dealing with each other and it works! I loved seeing the two come together and work things out.

This book, as the others in series do, had a great sense of family. It’s not like any family that I’ve ever met in real life but it works for these crazy dragons and they may be tough on each other but that’s the way they show love. I can’t help but love the way they show their affection for each other – even though there’s a lot of head-butting involved. 🙂

A great addition to the series and it was nice to go back and get Bram and Ghleanna’s story after reading about them so often.

This title is available from Zebra Books. You can buy it here or here in e-format. This book was provided by the publisher in exchange for an honest review.