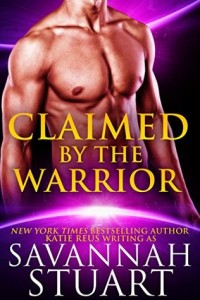 Held captive against her will…

When Leilani travels to the mountain region of her new planet, Lumineta, she discovers the remote mountain clan has a law stating that any unmated female in their sector can be forced to live there for one moon cycle. At first she’s livid—until she realizes that being held captive means that the warriors bring her gifts and simply try to impress her as part of their courting rituals. But she’s not interested in anyone except the sexy leader—and living under his roof makes her feel nothing like a captive. He has her rethinking everything she thought she knew about Luminet males.

Con has never thought much about taking a mate. As leader of his clan, he’s too busy and females are too complicated—especially those mysterious humans. But the longer he’s around Leilani, the more he realizes she’s worth fighting for. Despite his planet’s tradition that says two males mate with one female, he has no intention of sharing—or ever letting her go.

Leilani isn’t from the planet Lumineta. She was rescued from a dying planet (we never know what the name of the planet is but it sounds a lot like Earth) and brought to Lumineta along with many other women from the same planet. On Lumineta the men outnumber the women so most women take 2 mates – seems to work for them. Leilani’s not sure how she feels about it so she hasn’t chosen a mate – or mates – yet. The two female friends she made on the transport on the way to the planet have both claimed mates and are deeply in love. She knows that the Lumineta men are beautiful and respectful of women but it’s a bit daunting being around men who are constantly trying to mate her. She works at an architectural firm who is currently doing a job for a clan in the mountain regions and heads there to discuss plans with them. Unfortunately she’s not familiar with their laws and once she gets there one of their men enacts one of their primitive laws and Leilani is stuck in the region for the next moon cycle (a month).

She stays at the house of the clan leader, Con, and though she finds him incredibly attractive she’s pissed that she’s basically being held against her will. Fortunately Con, who also finds Leilani attractive, makes an effort to put her at ease and soon the pair are in bed together. Although they each say that it’s just for fun til she leaves they each discover that being apart isn’t what they want after all.

I received this book and immediately started reading. I then stopped and bought books 1 & 2 in the series. No, you don’t need to read them to enjoy this book but it does give you a good foundation of the world to work with while reading. (I also hate reading things out of order but that’s all my issue.) The men that I had gotten used to in books 1 & 2 were quite different then the men in book 3. These men were mountain men – strong, gritty, more primitive – but still honorable men and respectful of Leilani. They enacted the law just so she wouldn’t leave and they could try and court her which is incredibly strange but I guess they thought there was no other way they were gonna get a woman out in the snow otherwise! lol.

Anyway, I liked the men a lot, especially Con. He had been hurt by his mother when she had walked away from her mates and her children and didn’t think love was for him. Then he met Leilani and that changed. Yes, they fell in love quickly but Con was such a sweet man how could she not fall in love with him?

Leilani was an independent woman who didn’t want to be tied down, at least that’s what she told herself. I wouldn’t have liked to have been held against me will either but she I thought she acted a tad childish at first. Luckily she got over that. 🙂

There was another subplot that involved Leilani as well but I won’t get in to that as it’s best discovered on your own. I thought the story was good and I really enjoyed reading the story. As I said before – there’s no need to read books 1 & 2 first but they’re good so why not?

This title is available from KR Press, LLC. You can buy it here or here in e-format. This book was provided by the publisher in exchange for an honest review.