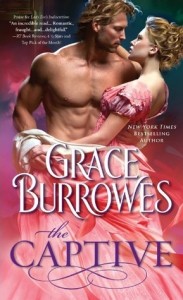 As a young boy, British-born Sebastian St. Clair was abandoned in France and forced to join the French army in order to survive.

Now that the war is over, he has returned home to his beloved England, and is determined to live a quiet life as a country gentleman. He believes that his wish is about to come true when he begins to fall for his elderly aunt’s lovely companion, Miss Millicent Danforth.

But the French are not quite ready to let him go, and they’ve devised a devious plot that could destroy everything that Sebastian holds dear. He will have to use all of his wits if he plans on escaping this scheme with his life…and his love.

Whitley’s review of The Captive by Grace Burrowes.

This was my first Grace Burrowes book, and I’m not sure if it’ll be my last or not. I really didn’t like the writing style of it, but she comes up with such enticing premises that I don’t know if I’ll be able to stay away. (Then again, nothing bad happens if I give in, so it’s not much of a problem.)

Still, if you’re like me and prefer your romances easy to read, this one might not be for you. I had to slog through a narration that was so dense with compound-nouns and modifiers and convoluted sentences that it felt like a chore. Some of her turns of phrase were pretty enough, but most of the time it just felt like trying too hard to sound…old. It wasn’t particularly difficult to understand, just dense in a way that didn’t really add anything to the experience. I’ve read plenty other historical romances that kept that toff tone to the narration without stuffing the word count quite that much.

Still, even though it wasn’t to my taste, the writing was smooth enough and the premise was engrossing. Sebastian was a nice tortured hero with just the right balance of angst and hope to keep me rooting for him. He was sweet to his lady, distinctly non-ass-ish, though I liked his interactions with his former captives a lot more than his interactions with Milly. There were a lot of layers and nuance and angst in there that I really appreciated and enjoyed reading about.

The romance was rather lacking in this book. I appreciated that they got married halfway through and didn’t let the wedding bells stand in for “all our problems are over now!” On the other hand, they didn’t seem to have much impediment to their feelings. It was pretty straight forward. “I think you’re hot. You think I’m hot. We got caught kissing. Time to get married!” They put up a nominal resistance at first, which only served to make their coming together feel abrupt. Weak circumstances kept them apart, and equally weak circumstances brought them together. If a couple is kept apart by circumstance, it really should be personal perseverance that overcomes that, not another coincidence, or else the couple’s feelings get left right out of the equation. I just didn’t get any feelings of longing from Milly and Sebastian before the wedding, and then an overabundance of that immediately after.

And I know not everyone reads romance for the sex, but I do, so a comment on that: it’s very vague, thanks to the meandering language. They would kiss, then the narration would hare off for several lines about a metaphor, to the point where I wasn’t sure if they were even still kissing or just had a little peck on the lips. Very little in the way of visceral descriptions.

Overall, a good premise and an interesting hero and side characters, but lacking in real warmth or connection. Definitely one more for the mind than the heart.