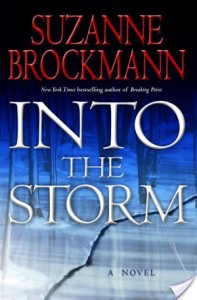 Reviewer: Rowena
Into the Storm by Suzanne Brockmann
Series: Troubleshooters #10
Also in this series: All Through the Night, Over the Edge

In a remote, frozen corner of New Hampshire, a Navy SEAL team and the elite security experts of Troubleshooters Incorporated are going head-to-head as fierce but friendly rivals in a raid-and-rescue training exercise. Despite the frigid winter temperatures, tension smolders between SEAL Petty Officer Mark Jenkins and former cop turned Troubleshooter Lindsey Fontaine after an impulsive night of passion goes awry. And then suddenly Tracy Shapiro, the Troubleshooters' new receptionist, vanishes while playing the role of hostage during a mock rescue operation.

Teaming up with the FBI to launch a manhunt in the treacherous wilderness, Jenk and Lindsey must put aside their feelings as a record snowstorm approaches, dramatically reducing any hope of finding Tracy alive. The trail is colder than the biting New England climate until a lucky break leads to a horrifying discovery - a brutally murdered young woman wearing the jacket Tracy wore when she disappeared. Suddenly there is a chilling certainty that Tracy has fallen prey to a serial killer - one who knows the backwoods terrain and who doesn't play by the rules of engagement.

In a race against time, a raging blizzard, and a cunning opponent, Jenk and Lindsey are put to the ultimate test. Risking everything, they must finally come together in a desperate attempt to save Tracy - and each other.

Mark Jenkins and Lindsey Fontaine. I remember this book fondly but what’s weird is that I remember mostly that I loved the heck out of Izzy Zanella in this book. Ha! Poor Jenkins.

Anyway, SEAL Team Sixteen and the Troubleshooters Inc. folks are going head to head in a mock training exercise. Competition is fierce and both sides want to win but when their fake hostage Tracy Shapiro goes missing, their friendly competitive training operation gets thrown to the wayside because…shit gets real.

Jenkins and Lindsey are battling wits and feelings after an unexpected night together but Lindsey is adamant about shutting that shit down. She wants nothing to do with a relationship and what should have been a whole lot of sexual tension, was actually bogged down with too much shit that I wanted to beat out of Lindsey.

This wasn’t my favorite book in the Troubleshooters series but I still enjoyed it quite a bit. There’s a whole bunch of Troubleshooters goodness in the form of seeing everyone from the team (old and new) and I really liked seeing what everyone was up to.

As much as I enjoyed this book, I still felt like Jenks was jipped because it was Izzy that stole the story for me. Completely stole Jenk’s thunder. I was much more interested in what he was up to and even though I know who he ends up with, I still low key wanted him to hook up with Tracy.

Lindsey bickered her way through this story and at first, Jenk just kind took it with his tail between his legs and it drove me crazy because I wanted him to be more like Sam and Wildcard and freaking fight her back but I never felt like that was Jenk’s style, which is probably why he’s not one of my favorite Troubleshooters series. Lindsey got on my nerves a lot but in the end, I believed in her feelings for Jenk and I was glad that they got their shit together long enough to own up to their feelings for each other. Jenk came a long way in this book and I liked him a lot better in the end.

My favorite part of this book was seeing everyone again. The older characters meeting up with the new characters and all banding together to fight the bad guys. I want more of this. I miss these guys. Still, solid book for me.

This book is available from Ballantine. You can purchase it here or here in e-format.