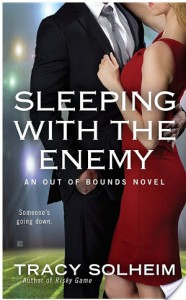 The author of Risky Game returns with a football team owner who’s a real player, and the woman who’s ready to call him out on everything . . .

Dot-com millionaire Jay McManus is discovering that owning a pro football team like the Baltimore Blaze isn’t easy. An anonymous blogger is out to destroy his reputation, and now his team is being sued by its own cheerleaders. If Jay’s not careful, he could lose big—and not just financially.

Bridgett Janik’s brother may play for the Baltimore Blaze, but she’s not thrilled to be defending Jay McManus, the man who broke her heart. It’s bad enough she has to mingle with Jay during games, but working beside her former lover may be too much for her body—and her heart—to resist.

Jay’s determined not to let Bridgett slip away from him a second time. But, as the two follow the mysterious blogger’s trail, secrets—both past and present—are revealed, and Jay and Bridgett must decide if their relationship can be something more than just sleeping with the enemy.

Sleeping with the Enemy is Book 4 in the Out of Bounds series by Tracy Solheim. Of the four books in this series, I’ve only read one. Book 2. And now I’ve read Book 4. I have issues. What’s funny is that I was looking forward to Book 3, the hero of that book just so happens to be the brother of Book 4’s heroine. Haha.

Anyway, this book follows Brody Janik’s older sister Bridgett as she reunites with the one man that left her ten years ago, heartbroken and all alone. How, you ask? Well, she’s a big shot lawyer these days and Jay McManus (the heartbreaker) bought the Baltimore Blaze, the team that her brother plays for and they’re getting sued by some cheerleaders over a list of things. Sexual harrassment is one of those reasons. So Bridgett’s firm is hired for the Baltimore Blaze’s defense and Bridgett is put on the case because her brother is a player for the team and she’s a woman.

She’s not happy about the situation anymore than Jay is but once they’re thrown together, fate really brings them together.

The two of these guys have a serious history. They were in love ten years ago and a whole lot of shit went down and they fell out of touch with each other. There was a lot of heartbreak, hurt feelings and just some straight up misunderstandings. Holy cow when everything comes to light and the two of them realize how much time they lost being a part from each other over things that they “thought” about the other…I don’t know how they both didn’t go completely crazy. It was madness.

But I really enjoyed getting to know both Bridgett and Jay. I thought it was funny that Jay was being sued for sexual harassment and the guy sexually harassed Bridgett at every turn. She kept turning him down and he just kept coming back, bulldozing right over her every objection. I also thought that it was hilarious that Bridgett wasn’t surprised by the sexual harassment charges and commented on it.

There were times when I wanted to strangle Jay because of the very same reasons that Bridgett would get pissed off about and ultimately left him over. I hated that he gave everyone under the sun chance after chance, no matter how much their choices hurt him but Bridgett slights him once and he cut her out. Thought the worst of her and everything.

As much as Jay bugged me, I didn’t hate him. I knew that the both of them had some serious feelings going on for each other and I knew that Bridgett was right there in every single moment she shared with Jay. He was her kryptonite that turned into her world and I loved seeing their love for each other rekindle. They were good together and their history was interesting and dramatic but oh so passionate. Their story made for a great reading adventure.

Bridgett was strong and she was fierce and she was at her core, a loving person. I loved seeing her in action with her family. The Janiks were great. They were loyal to each other one minute and made each other cry the next minute. They were the kind of family that anyone with siblings can understand and connect with. I know that I did. I really need to go back and read Brody’s book because whew, he’s a hot one.

I wonder if Gwen and Adam will get a book or if Gwen will get one with someone else. I would be down with that.

This was a solid story in the Out of Bounds series and I’m glad that I read. The romance was sweet at times and passionate at others times. Jay and Bridgett brought the steam whenever they shared page time in this one and I ate it all up. I enjoyed seeing Brody and Shay again and all of the other characters. This is a good one and I recommend it for fans of the series.