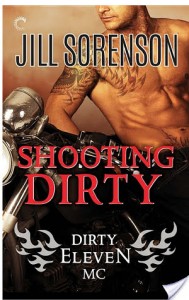 She's his only salvation

Ace Clemmons has wanted Janelle from the moment he first saw her. Taking her captive while he carried out his last hit as a member of Dirty Eleven nearly broke him. Now that he's gone straight, he's back in her life, looking to stake his claim. He can't erase the past but he'll do anything to make it up to her.

Janelle Parker needs a new start, far away from the trailer park and the strip club. A down and dirty affair with a tattooed criminal is a step in the wrong direction, but she can't resist Ace's deliciously commanding touch, which has haunted her dreams for months. Soon they're both in too deep, falling hard and fast—until an old feud with a rival motorcycle club explodes into an all-out war. Dirty Eleven's enemies won't hesitate to hurt Janelle to get to Ace. She has to fight to survive…and for the fiercest love she's ever known.

I haven’t read many of Jill Sorenson’s books even though I keep meaning to. I picked this book up because it sounded interesting and I miss Sons of Anarchy. I’m super glad that I decided to try this one because it was good. Everything that I loved about SOA was found in this book. I thought Sorenson did a great job of writing that crude, tough macho anti-hero because like Jax Teller, I found myself really liking Ace.

So this book follows Ace and Janelle as they fumble their way to their happy ending. Ace is an ex-member of the Dirty Eleven MC. He used to be the enforcer, the guy the club sent out to do the dirty work and by dirty work, I mean kill. lol. After his last job, which involved kidnapping a young woman and holding her hostage, he threw in the towel – much to the chagrin of the President of his MC. When he gave up his patch, he was supposed to be shunned from the other brothers in the MC but as Ace starts handling his business in this book, he realizes that his brothers from Dirty Eleven are still his brothers. They still have his back and that’s a good thing cause he needs them.

Janelle is a stripper trying to make ends meet and build a better future for herself. She’s doing all of this in an effort to give her young son, a better life. Things haven’t always been easy for Janelle but she’s smart and determined. The last thing she needs is a bunch of bikers sniffing around her doorstep, looking for Ace – the guy that kidnapped her. The guy that she can’t get out of her mind, no matter how hard she tries.

So Ace and Janelle are thrown together and Ace tries his best to look out for Janelle and her young son, Jamie. He’s not the caring type but he feels a responsibility toward Janelle so he watches out for her.

The romance between Ace and Janelle wasn’t perfect but neither was the world that they live in. The book can be described as crude, gritty and raw and the story in general, just worked for me. I was into everything that was going on and even with Ace, not being the most stand up of guys (I mean, let’s be real – he used to be a killer) but like Jax Teller, I loved him anyway.

I thought Janelle was a great heroine. She didn’t put up with anyone’s shit and she stood up for herself and for those that couldn’t stand up for themselves (at work). She wasn’t the most perfect of mothers but I liked that she never stopped trying. She made the most of not only what she had but of every situation thrown her way and at the very front of her priorities was her son.

There was a lot of things in this book that made me roll my eyes down the street but overall, the story itself was entertaining and I enjoyed it. I’m definitely looking for more from this series. I’ve got my fingers crossed for a book between Tiffany and Rex. Please make that happen, Jill Sorenson. 🙂

This book is available from Carina Press. You can purchase it here or here in e-format. This book was provided by the publisher in exchange for an honest review.