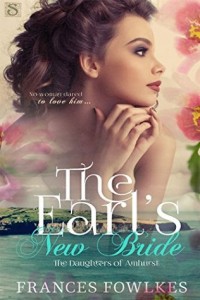 Reviewer: Tracy
The Earl's New Bride by Frances Fowlkes
Series: The Daughters of Amhurst
Also in this series: To Win a Viscount, The Gentleman's Promise

The Earl of Amhurst has returned to his estate in search of a wife and, more importantly, an heir. Simon Devere isn't interested in some comely, simpering creature. A beautiful woman only brings heartbreak and ruin, and Simon's disfigured visage is proof enough of that. No, he wants a wife who is unattractive and undesirable-and the homelier, the better.

But nothing about Lady Henrietta Beauchamp is homely. She is lovely and sweet... and struggles to mix with polite society when she would so much rather have plants for company. And yet Simon is her only hope for keeping Plumburn Castle in her family's possession. Even if it means marrying a man she doesn't love.

It's an impossible and unlikely match... unless this awkward beauty can bring hope back into a solitary beast's life.

The Earl of Amhurst is throwing a party at his country home to try and find a bride. He invited several women including the daughters of his distant relative – the daughters of the man he inherited his title from. He really doesn’t want to marry at all as he’s been betrayed by every woman he’s ever loved or even cared for. The only reason he’s marrying is because he needs an heir so that his brother won’t get his hands on the title…ever.

Henrietta is a woman on a mission. She wants to keep her family estate in the family and the only way to do that is to marry the new earl. She’s more about her family home than she is about the man but she can’t deny that he is quite handsome and she finds him interesting. Sadly she is more comfortable with plants than she is with people and with her constantly battling her nerves she fears that he’ll never take a serious look at her.

Simon doesn’t want to be attracted to Henrietta as she’s too beautiful and too dark-haired. All of the women who betrayed him in the past were all dark-haired and he doesn’t trust any of them. Except that Henrietta, despite her clumsiness and stutter, catches his attention from the first moment he lays eyes on her and he can’t seem to get her out of his head. Then she goes and starts taking care of him with her herbs and her kind words and he’s very confused. Unfortunately the women in the house keep getting sick and when they find out that herbs are to blame Simon thinks he’s got his proof that all women are horrid – including Henrietta.

This was an unexpectedly good story. I really liked the characters, the story and the writing and that was wonderful.

Simon was a bit of an enigma for most of the story. He was in the papers constantly – having been accused of killing his mistress and then disappearing for five years. He had been exonerated but that didn’t stop people from thinking the worst of him. He was a good man with a good heart and had been betrayed so many times by women I felt sorry for his past. I loved that his determination to stay away from Henrietta crumbled under her ministrations of his headaches. He was also a bit of the jealous type (which worked out perfectly for Henrietta) as his friend was making a play for her as well.

Henrietta was really a book nerd. She loved plants and books and reading books about plants and their healing properties. She wasn’t good with people at all and having to put herself out there to get Simon to notice her went against everything in her. She did a good job though and I enjoyed her personality – both when she was with him and when she wasn’t.

The book would definitely be categorized as a light historical and it was a fast, easy read. I would love to read more from this author in the future – maybe even get the stories of Henrietta’s twin sisters. 🙂