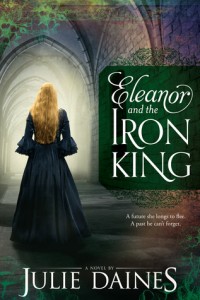 Eleanor de Lacy is forced into an arranged marriage with her father’s greatest enemy, Brac Goch, the Welsh king. All Eleanor knows of Brac is that he is a ruthless, war hungry man.

Eleanor arrives at the Welsh castle of Bryn Du already expecting the worst. When the ghost of Brac Goch’s first wife appears and warns her that the Welsh king is not to be trusted, all of Eleanor’s fears are confirmed.

As the countdown to her wedding day approaches, Eleanor must figure out who is lying, who is telling the truth, who is loyal, and who is the traitor–and most of all, if she can love an enemy king.

Eleanor’s father and Brac Goch, the Welsh king have been at war. Eleanor is now the key to a truce according to her father. She has been promised in marriage to the man they call the Red Worm, being sent off to a country she knows nothing about to a people she can’t communicate with. It’s not her best day! When she arrives at Bryn Du she can hardly look at Brac, who she’s been told killed her brother due to a battle that he instigated. Despite her reservations, however, Brac is nothing but accommodating to her until he sees all of her healing herbs and practically accuses her of being a witch. That doesn’t go over too well. Brac takes away Eleanor’s herbs and she feels like her life is over. She feels like she is in now in prison! She loves healing the sick and now this oaf of a man won’t even let her do that to keep herself occupied.

Eleanor does make a couple of friends at her new home but she’s still leery of Brac. He is kind, even when she thinks he might not be which is confusing for her. She starts hearing rumors about an English prisoner that was once in the dungeon, who she believes might have been her brother and that puts her on the hunt for answers. Then she starts getting messages written in blood and sees a woman who might be Brac’s dead wife. There are strange happenings but none stranger than Eleanor’s thawing feelings toward Brac. Unfortunately there are other things and people trying to hurt both Eleanor and Brac and neither one of them are fully prepared for who might be out to hurt them.

I was intrigued by the blurb of this book so I was excited when everything I hoped for was provided! The story was considered a romance and there was definitely a bond growing between the h/h but there were so many other things going on that it wasn’t the main focus. I can’t believe I’m gonna say this, but that worked for me.

Eleanor’s just 18 and here she is thrust into a new environment and forced to live with and get engaged to the man she thinks killed not only her brother but a ton of her father’s people. I’d probably have my guard up as well, and rightly so. Eleanor doesn’t know how to feel or what to think. Brac seems to be trying to get to know her but she doesn’t want to have anything to do with it but…there are times when she just can’t help but be slightly charmed by the man. She’s told he’s done horrible things but he says he didn’t – she doesn’t know who to believe and I loved that that trust had to grow slowly. It wasn’t as if she suddenly went – omg, I love this guy. No, didn’t happen. Even at the end of the book there were technically no “I love you’s” and it all fit with the flow of the majority of the book.

There was lots of mystery in the book as we have no idea who’s right and wrong and who exactly the villain is. Do we believe that Eleanor’s father is telling the truth about the attacks or Brac? And when the strange ghostly visits are upon Eleanor, and Brac isn’t forthcoming, you wonder if Eleanor’s losing her mind or not. It was well done and there were a few surprises in there as well.

I would have loved to have had just a little bit more of a thawing between Eleanor and Brac and frankly a little bit more from Brac in the book. The story wasn’t told in first person POV so I was disappointed in the lack of info about Brac that was offered – or any of his thoughts for that matter – but it still worked for me for the most part. The ghost aspect of the book was a tad far-fetched but that worked too.

Overall this was a very good story and one I recommend. I look forward to more from this author in the future.

This title is available from Covenant Communications, Inc. You can buy it here or here in e-format. This book was provided by the publisher in exchange for an honest review.