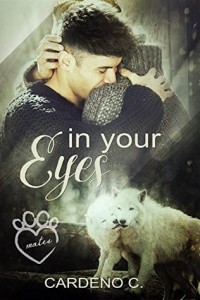 Reviewer: Tracy
In Your Eyes by Cardeno C.
Series: Mates Series #3
Also in this series: Wake me Up Inside

Raised to become Alpha of the Yafenack pack, Samuel Goodwin dedicates his life to studying shifter laws, strengthening his body, and learning from his father. But despite his best efforts, Samuel can’t relate to people, including those he's supposed to lead.

When Samuel meets Korban Keller, the son of a neighboring pack's Alpha, he reacts with emotion instead of intellect for the first time in his life. Resenting the other shifter for throwing him off-balance, Samuel first tries to intimidate Korban and then desperately avoids him. What he can't do is forget Korban's warm eyes, easy smile, and happy personality.

When a battle between their fathers ends tragically, Samuel struggles to lead his pack while Korban works to break through Samuel’s emotional barriers. Two very different men with a tumultuous history must overcome challenges from all sides and see past their society’s rules to realize they are destined for one another.

Tracy’s review of In Your Eyes (Mates #3) by Cardeno C.

Samuel is going to be the best Alpha he could possibly be. From the time he’s small he was following his father around and learning from him – his current alpha. Everyone loved his father and he tried to teach Samuel to lead with strength, power, and decisiveness along with empathy, compassion, and flexibility. Samuel had the first three but he certainly didn’t have the last three. He was more a book smarts kind of guy and didn’t get along well with people. He meets Korban at a meeting of Alpha’s and there’s something about Korban that makes Samuel’s skin itch. He’s not sure what it is but Korban is nice and kind and they end up playing together (Samuel is just 8 years old). They don’t see each other again until Samuel is 15 and he still has the same itch under his skin. It’s not until Samuel is twenty-three that he meets Korban again and it’s not under good circumstances.

Korban’s father, Dirk, the alpha of the Miancarem pack, challenges Samuel’s father and things get into a weird area with Samuel seeking retribution from the Miancarem pack, etc. When that retribution comes in the form of Korban’s life, and Samuel is expected to kill him, he can’t do it as he finally figures out that Korban is his true mate.

This was another good book in the Mates series. This story showed us more about Samuel, his growing up and his emotional issues, or lack of them I should say, during the first part of the book. Samuel just wasn’t an emotional person and as much as his father tried to get him to understand the emotional part of being an alpha and having empathy toward his people, Samuel just couldn’t understand.

The first half of the book barely had Korban involved in it at all which was a little disappointing. That being said I thought the story brought Korban and Samuel together in an interesting fashion as Korban was brought to Samuel to kill. The true mate bond was set up in the first book and makes the mates two halves of a whole. In Samuel and Korban’s case that was well written and they played off each other really well. With Samuel being able to practically get into Korban’s head he could see and finally feel the emotion that he could never figure out and learned how to be more empathetic, flexible, and compassionate.

I do wish that we had gotten more of Korban in the book as the parts he was in I really liked. He seemed like a nice guy and I wanted more. I also couldn’t agree with exactly why he never came out and told Samuel that they were true mates. Yes, a reason was given in the book but it just didn’t seem plausible that Korban could stay away from Samuel all those years and be ok with it. IDK, it just didn’t fit everything I’d read about in books 1 & 2.

Despite a few issues with the story I found it quite good. If you like m/m paranormal/shifter books then this series would be a good one to check out.

This title is available from The Romance Authors. You can buy it here or here in e-format. This book was provided by the author in exchange for an honest review.

Guest Review: Wake Me Up Inside by Carde

Guest Review: Wake Me Up Inside by Carde