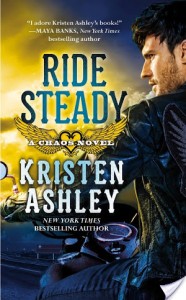 The ride of her life . . . Once upon a time, Carissa Teodoro believed in happy endings. Money, marriage, motherhood: everything came easy---until she woke up to the ugly truth about her Prince Charming. Now a struggling, single mom and stranded by a flat tire, Carissa's pondering her mistakes when a vaguely familiar knight rides to her rescue on a ton of horsepower.

Climb on and hold tight . . . In high school, Carson Steele was a bad boy loner who put Carissa on a pedestal where she stayed far beyond his reach. Today, he's the hard-bodied biker known only as Joker, and from the way Carissa's acting, it's clear she's falling fast. While catching her is irresistible, knowing what to do with her is a different story. A good girl like Carissa is the least likely fit with the Chaos Motorcycle Club. Too bad holding back is so damned hard. Now, as Joker's secrets are revealed and an outside threat endangers the club, Joker must decide whether to ride steady with Carissa---or ride away forever . . .

Carson had a crappy home life growing up with his dad beating him and treating him like a slave. He was thought of as the loner/loser kid at school. He had a crush on a cheerleader named Carissa who was nice to him but he knew that he could never date her. When he was just months away from his 18th birthday he finally decided to fight back when his father came at him. He knocked his dad flat and left town. Now he’s back and part of the Chaos MC and his road name is Joker. He designs and builds cars for the Chaos business and he loves what he does. When he stops to help a woman with a baby on the side of the highway he’s shocked when he realizes it’s his HS crush, Carissa.

Carissa hasn’t had a fabulous life either. Her sister was killed when she was young then her mother died when she was 17. Her father is around but he lives with her grandmother who has Alzheimer’s so she doesn’t see him often. All through HS Carissa dated Aaron and then eventually married him and had a baby. Aaron is a complete asshole and not only cheated on Carissa but then kicked her to the curb when she was still pregnant with their son, Travis. When Carissa meets the MC member, Joker, she’s immediately attracted to him and tries to pay him back for the kindness he did her on the highway. What starts as just an acquaintance soon turns in to much more.

This was a really great book. I loved both of the main characters as well as a ton of the secondary characters as well. There were some characters brought in from other series that confused the hell outta me cuz it seemed that the author assumed we’d know who they were but I didn’t have a clue. That was kind of annoying.

The relationship between Carson and Carissa was awesome. They were each trying to heal the other in their own way and I could feel the love between them almost immediately – even though they didn’t mention love for quite a while in the book. They had incredible communication and that paired the angst down considerably. She helped him live life again and deal with his childhood and he helped her grow stronger in dealing with her ex-husband.

I adored how Carson was with baby Travis. He immediately took to the child and was so good with him. We learned that he had taken care of kids in the 7 years he was gone as a way to get his rent down and that explained his comfort level with Travis. Travis was a great little baby character – only 8 months old but a stinker when it came to slapping people upside the head. lol I kept waiting for Carissa to tell him not to hit but that never happened. J

Such a good book! I really liked it a lot (which I’m really happy about since I didn’t care for book 2 at all). I’m very much looking forward to High’s book in October!

This title is available from Forever. You can buy it here or here in e-format. This book was provided by the publisher in exchange for an honest review.