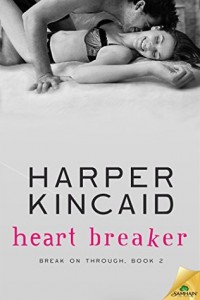 Former man-eater Samantha Lockhart has been an actress long enough to be able to spot a smooth-talking player a mile away. Dark-haired, bourbon-eyed, a wicked smile…Kyle Masterson is one of the best.

From his bad-boy motorcycle boots to his good-ole-boy Southern drawl, everything about Kyle screams sex appeal. But after a tragedy hits close to home, Sam tries to convince herself she’s done with players on and off the stage.

Kyle, a V-twin-riding divorce attorney, has witnessed enough horror stories of love gone wrong to know that while women are welcome in his bed, they’re definitely not in his future. But once the petite, mercurial redhead catches his eye, he can’t think of anything—or anyone—else.

Sam’s trust doesn’t come easy, but the more time they spend together, the deeper they both fall. Yet just as they’re breaking through each other’s barriers, someone who doesn’t like being upstaged makes a deadly play of his own. And if Sam refuses, she may not be able to breathe a word to anyone…ever.

Sam is an actress living in her childhood home. Her and her sister moved into the home after their parents were killed by a drunk driver. It’s been 7 months since they died and Sam hasn’t returned to her do an acting jobs. She has been renovating her home and has pretty much been a hermit. She finally is talked into attending a super bowl party at a neighbor’s house where she meets Kyle.

She finally decides to get back into acting and goes for an audition and gets the part immediately. Unfortunately she finds out that a director she swore she would never work for again is the one directing the play.

In the meantime Kyle is pursuing Sam but Sam isn’t sure where their relationship is going. She’s confused but she knows that she’s falling in love with Kyle.

The couple in this book were interesting in that Kyle was a player and Samantha wasn’t. She used to use men but after her parents died that had changed and now she wanted something more lasting. She realized what a paradox it was. Seeing who she was from a different point of view was pretty eye-opening for her.

Kyle really cared for Sam but wasn’t exactly sure how to express himself. I liked him but I didn’t feel a connection to him in any way – I wanted to, but I just didn’t.

The story seemed to jump around a bit but it was still easy to follow. It was entertaining and I enjoyed reading it.