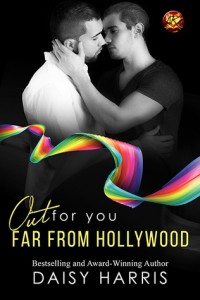 Pretending to be someone else is easy. The hard part is keeping it real.

Sheriff Jack Francis finds the last thing he would expect in the small town of Pookataw Valley, Idaho—a gorgeous yet troubled movie star on a bender. Though Jack is intrigued, he can’t afford to draw attention to his sexuality and risk a scandal.

Former teen idol Blake Tyler thinks hiding in Pookataw Valley is perfect—it’s isolated, beautiful, and comes with a sexy sheriff eager to share Blake’s bed. When Hollywood arrives in Pookataw Valley to film a reality show, Blake embraces the chance for a comeback, but Jack struggles to know what is real and what is faked for the camera.

If Jack wants to date America’s Sweetheart, he’ll have to make his private life public. Is he ready to share the spotlight?

Teen Idol Blake Tyler isn’t a teen any longer. He is thirty years old but still under contract with a franchise and with that he’s under a morality clause. When he finds himself at a party where the invitation said “dress like a porn star” he took it literally. Now he’s out on a balcony standing in the cold with nothing on but a sequined G-string and nipple tassels on trying to get away from a prominent blogger. He takes it upon himself to get away permanently and ends up crawling down a trellis – much to the delight of the public that are taking pictures of his bare ass hanging off the trellis.

Blake was let go from his contract and he is now hiding out in Pookataw Valley. He’s throwing himself a pity party with very loud music that ends up bringing the Sheriff to his door because of a noise complaint. Jack Francis is a gay man who isn’t out in his hometown. His sister and niece who live with him know but other than that no one does. When Blake mentions in his drunken stupor that he’s gay, Jack shares that he’s gay too.

Blake and Jack start seeing each other but no one knows about them. Blake reluctantly agrees to direct a musical theatre group for teens and Blake’s agent hires a publicist for him. The publicist is all about showing Blake at his best and getting his career back in order. She wants to show that Blake has a romantic interest but that means that Jack has to come out of the closet. Jack’s sister, who has lived in fear of her abusive ex-husband is loudly against Jack coming out. Jack is confused about what to do but when it looks like the publicist will be hiring a stand-in boyfriend for Blake, Jack has to decide whether to let it happen or come out of the closet.

Far From Hollywood was a cute story. I really liked Jack a lot. I liked his openness with Blake, his relationship with his niece and his protectiveness of his sister. He was a good guy and I was sad for him that he’d chosen to stay in the closet his whole life.

Blake, unfortunately, I never really warmed up to. I understood his desire to get his career back on track but it seemed to take precedence of just about everything. I never really felt his attachment to Jack though I certainly felt it on Jack’s side. There was just something about him that felt stand-offish throughout the story. Even though I did know he was trying it never felt like he was truly all in.

While I did have my issues with Blake I did like the story. I love a good coming out story and this one fit the bill.

This title is available from ARe. You can buy it here in e-format. This book was provided by the publisher in exchange for an honest review.

Guest Review: All Bite, No Growl by Jeni