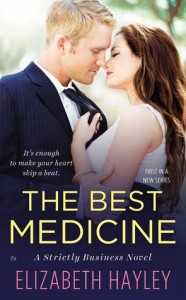 Lauren Hastings is finally ready to enter the real world. At twenty-six, she’s about to get her master’s in psychology, and she’s well on her way to beginning the career of her dreams—until she suffers public humiliation and has to endure something she thought she’d never have to deal with again: a part-time job.

A gig at Trinity Hospital isn’t exactly Lauren’s definition of a good time, but Dr. Scott Jacobs quickly changes her mind. He’s straight-up gorgeous, and he always gets what he wants. And that includes Lauren. It’s an ideal arrangement for both of them. No strings. Just fun—at least at first.

But feelings quickly begin to run deeper than either Lauren or Scott is willing to admit, causing issues neither of them want to confront. After all, who wants to risk the perfect relationship on something as terrifying, as messy, and as unpredictable as love?

Lauren is 26 years old and out with her friends at a bar one night when she’s basically accosted by an asshole she knew in school. Josh just doesn’t want to take no for an answer and she ends up giving him a punch to the throat and a knee to the balls for his insistence. A “signal” between Lauren and her friend Sam the bartender goes awry and next thing you know someone has pulled the fire alarm. She gets arrested for multiple reasons but ends up just having to pay the owner of the bar back for the damages that his insurance company doesn’t cover. Her mother finds her a job at the doctor’s office where she works and Lauren works there while finishing up her graduate degree in psychology.

The doctor Lauren starts working for is 29 year old Scott Jacobs. He’s hotter than hot in Lauren’s eyes and while he acts like an entitled jerk Lauren sees below the surface. She manages to pull out the good guy under the façade and becomes friends with Scott. Scott wants Lauren badly but he wants a strictly sexual relationship. He makes her promise that she won’t fall in love with him, and she does, but really, can anyone ever keep that promise when they have no idea how things will play out in the future? I don’t think so.

The pair become closer and closer but when Scott realizes that Lauren is in love with him he sets her free – which she’s not happy about. It’ll take more than a few people for Scott to realize the mistake he’s made in letting Lauren go.

This was a cute story. I really liked Lauren a lot. She was fun and friendly, had good friends and a good head on her shoulder. She was truly quite perfect for Scott even though he was completely blind. Down deep he knew that he was more attached to Lauren than what he thought but it was nice seeing him come the realization of how badly he’d fucked up. I thought that the author did a great job of having Scott getting back in to Lauren’s good graces. He didn’t grovel but it was done exactly how Lauren needed it.

Overall a fun, sexy story that was very entertaining.