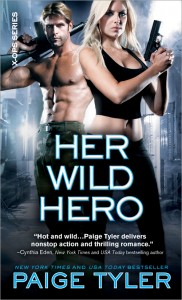 Department of Covert Operations Training Officer Kendra Carlsen has been begging her boss to let her go into the field for years. When he finally agrees to send her along on a training exercise in Costa Rica, she’s thrilled.

Bear-shifter Declan MacBride, on the other hand, is anything but pleased. He’s been crushing on Kendra since he started working at the DOC seven years ago. Spending two weeks in the same jungle with her is putting a serious strain on him.

When the team gets ambushed, Kendra and Declan are forced to depend on each other. But the bear-shifter soon discovers that fighting bloodthirsty enemies isn’t nearly as hard as fighting his attraction to the beautiful woman he’ll do anything to protect.

About the Author: Paige Tyler is the USA Today bestselling author of sexy, romantic fiction. She and her very own military hero (also known as her husband) live on the beautiful Florida coast with their adorable fur baby (also known as their dog). Paige graduated with a degree in education, but decided to pursue her passion and write books about hunky alpha males and the kick-butt heroines who fall in love with them. Visit her at www.paigetylertheauthor.com.

Check Out This Sneak Peek of Her Wild Hero:

Kendra glanced at Declan to see him looking off into the jungle again.

“What aren’t you guys telling me?” she asked. “Declan, where have you been disappearing to all day?”

It was Tate who answered. “Declan thinks someone’s following us and has been since late last night.”

She pinned Declan with a look. “You think? Or you know?”

He met her gaze. “There’s definitely someone out there, but they’re quiet—too quiet. And they’re keeping their distance most of the time. Every once in a while though, I’ll hear them move closer, but they disappear whenever I try to get a look at them.”

Kendra glanced at each of the guys. She knew they trusted Declan’s instincts, so that meant she did, too. “Should we tell the others?”

“Tell them what?” Tate asked. “That we’re suspicious about the coordinates we’ve been following for the last three days? That the bear shifter on our team is certain he’s heard someone following us, but that they’re a couple miles away? Would you believe any of that if you didn’t work for the DCO?”

“We keep our eyes open and be ready if the shit hits the fan,” Declan said.