In 2013 I discovered new adult author Jen Frederick. Her first book was problematic for me, but I absolutely loved her second. Over the last two years I’ve read most of her other works. I also followed her on Twitter and exchanged a few reviewer/author emails with her. Based on her familiarity with authors online, and the community as a whole, I suspected she was an author or blogger writing under a pseudonym. Yesterday, Jane Litte of Dear Author confirmed my suspicions when she came out as best-selling author Jen Frederick.

The response from the DA readership has mostly been positive. The comments on the article are all along the lines of “Awesome! Go you!” or they were up until about 175, which is when I stopped reading them). There was some anger and confusion on Twitter, but it wasn’t until an anonymous author posted at The Passive Voice that any real dissent was brought out into the open. The majority of comments on that article have been overwhelmingly negative toward Jane/Jen. I’ve seen claims elsewhere that the angry commentors at TPV are just the “Pro-EC crowd” attacking Jane and being jealous because she’s selling better than they are. I don’t really agree with that.

The fact is, Jane deceived a lot of people. They have the right to be angry about that.

Jane emailed me a few days before her confession went live to tell me she was Jen Frederick. Prior to that, as I said above, I suspected Frederick was a blogger or author, but I did not suspect Jane. To be honest, that Jen and Jane are the same person has no bearing on my enjoyment of her books. While I found some of them problematic, the fact is I absolutely loved Unspoken. I still love it, even knowing that Jen is Jane (and vice verse).

As Jane said in her post, she wanted to be judged on her own merits as an author, not as Jane Litte writing a book. I can understand and even support that. For years authors, bloggers and readers have criticized Jane for her reviews and commentary; often saying she has no knowledge of what it is to be an author, so she can’t/shouldn’t comment. There are many who don’t agree with the politics at DA, and I can see why Jane wouldn’t want her position as a prominent blogger to influence sales of her books one way or the other.

That Jane chose to publish her novels under a pseudonym, and keep that pseudonym a secret, doesn’t bother me at all. Authors often write under pens names – sometimes multiple pen names – and no one bats an eye. I know many bloggers who are also writers (aspiring and published). I know many authors (aspiring and published) who are also bloggers. I don’t see that it matters one way or another.

But I think Jane made two huge mistakes.

First she kept her secret for far too long. Once she’d published a book or two, and did well enough to know whether it was something she could continue, she should have come forward at Dear Author. That she decided to publish her books isn’t a big deal to me. That she chose to publish many, which ended up as bestsellers, including co-writing books with another best-selling author, which were picked up by a traditional publisher and optioned for movie rights, is harder to swallow.

Her second mistake – and this is the big one , in my opinion- was in creating a full, separate identity for Jen Frederick. A website? Sure. A Twitter or Facebook profile where she could announce information about her books? Absolutely. But Jane took it a step farther. She befriended many authors, bloggers and readers. She joined private author loops. She commiserated  over reviews, and the writing process, and publishing, and any other number of things, all while she was also what many refer to as the Watchdog of the romance community.

I do not think Jane set out to purposely deceive anyone. I also don’t think – as some have speculated – she created this author persona as a way to glean information for the purpose of reporting at Dear Author. Nor do I think she used the information she was privy to as an author to hurt any fellow authors in her role as a blogger. But now everything she and Dear Author stood for is suspect.

I also think, had it been another blogger who did exactly what Jane did, Dear Author would have jumped all over them. The community feels deceived and I understand why. More importantly, Jane’s credibility as a forthright blogger and as an author, is being questioned. Considering the amount of works she’s done for the good of the community as a whole, I’m really sad about that. I’m also a little disappointed that she did something I know she would have questioned someone else for. It’s especially frustrating considering her stance on things like this in the past. For example, the disclosure she included when another author reviewed Slave to Sensation by Nalini Singh at Dear Author. 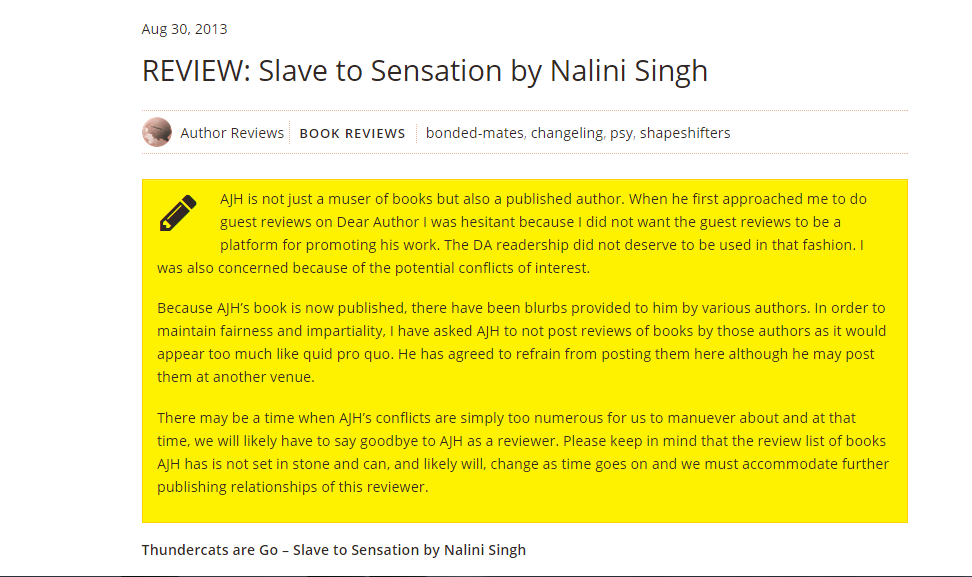 Of course, I haven’t even touched on the ethical questions this situation raises. Like the fact there were several mentions of Jen Frederick books at Dear Author, including Kati’s “Best of 2014” post, along with a mention in a Daily Deals post and an “If You Like” post, wherein Unspoken was recommended to those who like military roms. None of those are really Jane herself promoting her own work, but naturally it makes her claim that she kept the two separate a lie. A small one? Sure. But a lie nonetheless.

There’s also the fact that she was contracted with Berkley while still reviewing Berkley books. Did she positively review books from her publisher because they were her publisher? Probably not. But again, had she disclosed the relationship it wouldn’t be a question now.

For my part, I don’t plan to stop reading Jen Frederick’s books. But I do think she (as Jane and Jen), and Dear Author both, are a little tarnished now. In the end it comes down to trust. Jane broke ours. It’s as simple as that.