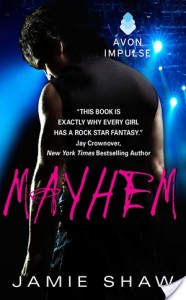 When college freshman Rowan Michaels meets gorgeous, up-and-coming rock star Adam Everest, she knows a player like him is the last thing she needs after her ex-boyfriend shattered her heart. But she can't stop thinking about the kiss they shared on his tour bus.
On the first day of school, Rowan is stunned when Adam saunters into her French class. He's soon failing miserably, and, on a whim, she offers to tutor him. But Adam doesn't recognize her as a makeup-free, glasses-clad college student—a far cry from the beautiful, mysterious "Peach" he met at his concert.
During a wild weekend on tour with the band, Rowan can't help falling for the sweet guy buried beneath Adam's rocker persona. Yet she knows she could never compete with the girls constantly throwing themselves at his feet. She'd just end up hurt … again.
Peach is all Adam thinks about, though, and when Rowan realizes this, she has a decision to make: stay just friends to protect her fragile heart … or reveal the truth about the night they met and admit she's fallen completely, hopelessly in love with him.

Rowan is out at a club called Mayhem with her friend, Dee, when she sees her boyfriend of 3 years (who is supposedly out of town for work) kissing another girl. She is devastated and heads out of the club to get some air. She’s approached by none other than the bands lead singer, Adam, who is kind and caring in her time of need and while he makes a play for her he takes it well when she turns him down. They spend a short amount of time together but it makes an impact on both of them.

Rowan ends up moving out of her apartment (that she shares with her cheating boyfriend) into Dee’s dorm room and goes on with her life while trying to get over her asshole boyfriend, Brady. She’s shocked on the first day of school when she sees Adam in her French class but as she sits in back and he in front he doesn’t see her. Day after day she witnesses him and his constant harem of women and tries to tell herself that it’s a good thing that he never recognized her. In a crazy move Rowan ends up offering Adam her tutoring services for French so he wont’ be kicked from the class. He accepts her offer but his band is on the road that weekend and she ends up spending three days with Adam and the band tutoring him and eventually becoming his friend. Yes, she really wants more but she knows he’s a player and that he doesn’t want a relationship so she’ll stay in the friend category.

Adam was completely floored by the woman he met at Mayhem. He didn’t ever catch her real name but referred to her as Peach. He has no clue that Rowan is Peach as she dresses down, wears glasses and puts her hair up in a messy bun. He gets closer with Rowan, however, and though he says just friends he might be thinking there’s something more there.

I really enjoyed this book. I liked the different premise of the tutor going on the road with the band as it added another dimension to the relationship between the h/h that we wouldn’t have gotten had they just been on a college campus.

Now Adam was a total player. He never actually took a woman to his room on the bus while Rowan was there but he certainly kissed a girl or two. I actually liked that they showed this part of him. He wasn’t completely smitten with Rowan from minute one and he certainly didn’t change his spots in one day just cuz she was there. I liked that we actually saw this side of him as it made the softer, caring side he showed Rowan all that much sweeter. I know that some readers won’t like it but I did. Kind of like a rake in a historical romance and we actually got to see what gave him his name, ya know? Anyway, I really liked Adam and thought he was great for Rowan. The story was told from Rowan’s POV so we didn’t get much from Adam until the end but I still liked him from Rowans perspective.

Rowan I liked, but not as much as Adam. She was definitely more wishy-washy at times than I would have liked but hey, she was something like 18 years old. I’m pretty sure the majority of girls are that way when they’re 18. (Not all, but a lot of them! J) I didn’t care for her self-esteem issues either but they were there so I dealt with them. I did love the way she interacted with the band. Mike, Joel, and Shawn were great secondary characters and I’m looking forward to reading their stories in the future. I found that the h/h did fall in love quite quickly but I believe there are people out there who fall in love almost at first sight (and actually make it work!) so I didn’t mind all that much.

In the end it was a fun book that didn’t have a whole lot of angst – which was awesome. Sometime I just need to sit down with a book that’s fun and makes me laugh – as well as smile from the romance. This did all of that and more.