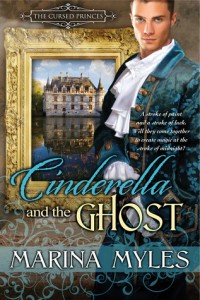 Reviewer: Tracy
Cinderella and the Ghost by Marina Myles
Series: The Cursed Princes #4

A DANGEROUS ATTRACTION
When her demanding stepmother died, Ella Benoit knew just how far their fortunes had fallen, unlike her spoiled stepsisters. So she never expected the bequest from her late father. A chateau in France and the freedom to live her own life, all at once!
The chateau has seen better days, but Ella knows she can put the ruined house to rights. The life-size portrait of its first owner, Jean-Daniel Girard, seems to watch her work with approval, even pleasure. With bright blue eyes, strong features, and an athlete’s body, the viscount is a tempting sight even now, more than three hundred years after his tragic death. But the more she looks at the portrait, the more convinced Ella is that she’s met Jean-Daniel before. In another life, perhaps—or maybe, as the form who haunts the halls at night, invading Ella’s dreams…

Ella has been badgered, beaten down and treated like a slave by her stepmother and 2 stepsisters. She promised her father that she would look after her stepmother but it was darned difficult. Once her stepmother dies she finds that her father bought a French chateau for her and left money for her to restore it to its former beauty. She’s excited about the adventure and excited to be away from her horrible stepsisters.

Once in France she finds that the house is supposedly haunted. She does have some rather strange things happening but while scared she honestly believes that the ghost – who she believes is the Vicomte in the painting, Jean-Daniel Girard – is trying to tell her something. She figures out that he wants her to return to him somehow but she has no clue what to do to time-travel. When she finds a magical amulet it manages to propel her into the past.

Once in the past Ella finds many things. First she meets Jean-Daniel who she instantly likes and soon grows to love. She also finds that there are many people in her 21st Century who were surely reincarnated from the people she meets in the past – namely her friend Mimi and of course her evil stepmother and 2 evil stepsisters. Can she not get away from them? She has to find a way that she and Jean-Daniel can be together but also find a way to save his life as she knows exactly when he died.

This was a cute little book and I liked the story, to a point, but sometimes found it to drag in places and go on unnecessarily in others. I think it could have been tighter and the story would have flowed better. The second half of the book seemed to fly by but the first half was slow going. I also wasn’t a fan of the Vicomte playing with a rubber ball with his dog in 1703 as rubber wasn’t invented until the 19th century

This is a twist on the typical Cinderella story and I really liked that. It had some good ideas going for it and I was happy that the couple found love. That is, until that HEA was trashed completely at the end. I ended the book and was ranting to my husband. How could the author dangle that HEA out there and make us think that all was well and then pull the rug out from under us??? The ending, which was supposed to make us happy, I believe, and make us think that Ella found her HEA (again pushing the reincarnation idea) was harsh and completely angered me. I wish that things hadn’t worked out for Ella and Jean-Daniel in 1703 as I would have been much happier with the conclusion in 2015.

Overall the book was ok but unfortunately I can’t say I completely enjoyed it.

This title is available from Kensington. You can buy it here or here in e-format. This book was provided by the publisher in exchange for an honest review.