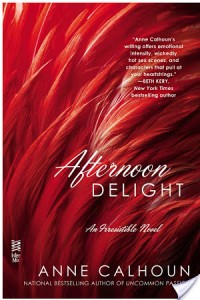 Sarah Naylor, food truck co-owner and recent Manhattan transplant, savors each moment of her new job—whether it’s refining the truck's menu, learning the city, or spending afternoons in bed with the hot paramedic who's fast becoming her favorite customer.

Tim Cannon spends his days sprinting from one emergency to the next. He eats like he works—at top speed—somewhere along the line he lost his ability to enjoy life's simple pleasures. Hooking up with Sarah is just another way to cope with the stress of his job, until their afternoon trysts coax Tim into enjoying everything he's avoided. Can Tim learn to balance his job saving lives with the everyday delights that make life worth living? If anyone can teach him, it’s Sarah….

Tim Cannon is a paramedic in NYC who is uses speed as his drug of choice. Not the actual DRUG but speed as in adrenaline. He does everything in his job well but he does it at the speed of light. He has to slow down somewhat to train his new paramedic but that’s about as slow as it gets. He eats fast, has sex fast and doesn’t’ stick around to smell the roses. That’s until he meets Sarah McCall. He’s in the park near his station one day for lunch – eating hot dogs at the speed of light – when she sees him and brings him a bowl of food from her food truck. Not only does he like the food but he likes her. Soon they’re back at his apartment and Sarah is showing him how doing things slowly can make things that much better.

Sarah moved to NYC after her aunt died. She had taken care of her aunt Joan for two years while she suffered from cancer but she eventually died. Joan wanted Sarah to get back to her old self but being with Joan and being there when she passed changed Sarah. She finds she really likes spending time with Tim and she likes the challenges they give each other when it comes to sex.

They spend more and more time together, exploring the city and finding new ways to enjoy each others company. Tim enjoys going slow with Sarah as he appreciates what happens when they go slow during sex but he refuses to see their relationship as anything other than sex – no matter what he’s truly feeling inside. He watched his grandparents die and that affected him greatly. Why stop to enjoy life when it’s all gonna end anyway, right? When his decision to see Sarah as nothing more than a sex partner comes back to bite him in the ass he realizes that maybe there’s more to get out of life if he slows down a bit.

I understood both Tim and Sarah’s issues and I was so happy when Tim finally pulled his head out of it and decided to live life again. Sarah was a great woman and I think she was perfect for Tim. That being said I did have a problem with the emotional connection between the two. I could see them getting closer but when it came down to it I felt it was really new and just starting to grow. The way that Sarah reacted when she realized Tim didn’t feel as strongly as she did was a bit confounding for me because I hadn’t seen the strength in the relationship quite yet. I would love to get a follow up story between Sarah and Tim and see more of a romance between these two.

Overall I liked story and it was a good way to spend a few hours reading.