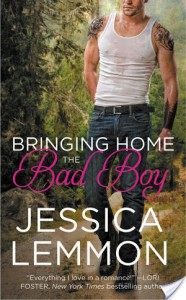 Evan Downey needs a new beginning. Since the death of his wife five years ago, the brilliant tattoo artist has shut himself away in a prison of grief that not even his work can break him out of-and what's worse, Evan knows his son Lyon is bearing the brunt of his seclusion. Moving back to the lake town of Evergreen Cove where he spent his childhood summers is his last chance for a fresh start.

Charlotte Harris knows she owes it to her best friend's memory to help Evan and his son find their way again, but she can't stop her traitorous heart from skipping a beat every time she looks into Evan's mesmerizing eyes. Charlotte is determined to stay strictly in the Friend Zone-until a mind-blowing night knocks that plan by the wayside. Now, if they're brave enough to let it, Charlotte and Evan might just find a love capable of healing their broken hearts . . .

Evan and his young son, Lyon, are moving to Evergreen Cove, a place that he spent most of his summers growing up. He needs to get out of the house that he lived in with his wife, Rae, as he sees her death every time he walks down the hall – as that’s where she died in his arms.

Charlie was Rae’s best friend. She had a crush on Evan when she was younger but Evan only had eyes for Rae. Now they’re friends. Charlie and her ex-boyfriend once hung out with Evan and Rae as couples and the pair get along fine.

When Evan sees a beautiful woman in a bikini laying out of the dock at the lake he’s anxious to go get to know her further. He’s shocked when he finds out that it’s Charlie but realizes that that instance provided him a view of Charlie he’d never had before. He starts trying to get closer to her but as much as Charlie longs for Evan and she loves Lyon to death, she can’t get over the feeling that she’s betraying Rae by starting something with her husband.

This was a really great story. I loved the ins and outs of Charlie and Evan’s relationship even though I thought at times that Charlie was fighting it all too hard. I still understood what she was going through as I feel that I would have some of the same issues as she did if I were in her shoes.

Evan was…hot. Everything about him was gorgeous. He was beautiful from head to toe and inside and out. He loved his wife dearly and would have liked nothing more than to have her alive and well but he knew that would never happen. He was also not blind to the fact that he and his wife didn’t have a perfect relationship. They had their issues and even though people tend to remember only the good about someone once they’ve died he wasn’t blind to their problems. He had survived 5 years without his wife and he was ready to start living again. He was still haunted by his own demons but for the most part he was a pretty great guy all the way around. I loved him and his son together and the fact that he didn’t let things slide with Lyon’s upbringing as he so easily could have – just from guilt alone.

Charlie took a little longer for me to warm up to. I thought she was overly dramatic at times but as I said, I understood where she was coming from. I would have liked to have seen her stand up to her ex (who was a complete douche) when he confronted her. He was such an ass and I wanted her to be strong in his presence. Unfortunately that didn’t happen but it would have been great to see. 🙂

While it had its issues I found the book to be an overall good one. I’m looking forward to see what happens next with the secondary characters we met in this book.

One response to “Guest Review: Bringing Home the Bad Boy by Jessica Lemmon”