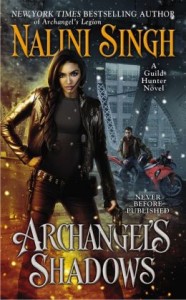 In the wake of a brutal war, the archangel Raphael and his hunter consort, Elena, are dealing with the treacherously shifting tides of archangelic politics and the people of a battered but not broken city. The last thing their city needs is more death, especially a death that bears the eerie signature of an insane enemy archangel who cannot—should not—be walking the streets.

This hunt must be undertaken with stealth and without alerting their people. It must be handled by those who can become shadows themselves…

Ash is a gifted tracker and a woman cursed with the ability to sense the secrets of anyone she touches. But there’s one man she knows all too well without a single instant of skin contact: Janvier, the dangerously sexy Cajun vampire who has fascinated and infuriated her for years. Now, as they track down a merciless killer, their cat-and-mouse game of flirtation and provocation has turned into a profound one of the heart. And this time, it is Ash’s secret, dark and terrible, that threatens to destroy them both.

Ashwini, a Guild Hunter and mortal, was severely injured in the war that was fought in New York. She, as well as the city, has been recovering and she’s not quite up for her normal assignments. She’s asked to go on a simple assignment to check out a dog that was found that look mummified – something similar to what happened when the Archangel Lijuan was sucking power from her minions during the war. Her fellow fighter, vampire Janvier, goes with her but they’re both stumped about what they find. Soon after that they are called to a murder scene where they find a woman who is sucked dry of blood and mummified, just like the dog was. This begins a search for the bastard who would dare to do this to a human being that by all accounts was just a country woman in the city looking for a better life for herself. Both Ash and Janvier are determined to find the killer and won’t stop their search until that person is brought down.

Ash and Janvier have a history together and a deep, incredible attraction and connection to each other. Ash wants nothing more than to take that final step with Janvier but she’s hiding a secret about herself that may destroy them both. Janvier wants Ash to become vampire so that they can live out their lives together and never be apart but Ash refuses. He has loved Ash almost from the first time they met and has been with no other woman since he met her four years prior. She’s the one for him and nothing will take her from him.

I can’t begin to tell you how much I loved this book. From the moment I read about Ash and Janvier in the novella Angels’ Pawn I was hooked on the couple. I have been waiting 5 long years to read their full story and I certainly wasn’t disappointed.

Ash and Janvier were practically explosive together. Even after they had finally fallen into bed together the sexual tension that was pouring off of them had me tied to the book. I couldn’t get enough of the pair. Their story was fun and funny, intense and serious, emotional and heart wrenching and I loved every minute of it. Janvier was such a great guy and I loved his toughness and his alpha vibe but he could also be gentle and you could tell he loved Ash very much. He treated her like gold and I adored him for it.

Though Ash had to deal with some serious shit with her family in this story is showed a depth to her that I think we wouldn’t have gotten had that part of the story not been included. Yes, she’s mortal but it made her more human/realistic to me and I found Janvier’s strength and support of her jvery moving.

I could go on and on but I think you get the picture. It was a damned good book and I loved it. If I could give it more than 5 stars I certainly would – it was just that good. If you haven’t read the Guild Hunter series yet I think you should. It’s a harsh world with tough people but the feelings that Singh instills in the reader through the characters love stories is something that sticks with you long after the last page of the book is read.