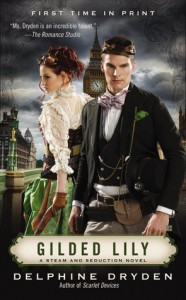 Frederique Murcheson’s introduction into society hasn’t gone smoothly—some would even call it a disaster. Only Freddie considers her debut a success. Her scheme to become a makesmith has gone off flawlessly. The only thing that could upset her plans now would be if someone discovered that brilliant tinker Fred Merchant is, in fact, a lady in disguise.

Wooing a spoiled heiress is not exactly Barnabas Smith-Grenville’s idea of high espionage. However, considering his brother disappeared on the job, supposedly into the most iniquitous of opium dens, he cannot expect much better. At least the assignment will afford him time to search for his brother, whom he suspects is in spy-related trouble rather than a drug-addled haze.

But when Freddie proves to be both irresistible and the key to the answers he seeks, Barnabas finds himself not only entwined in a scandalous mystery involving lethal submersibles and deranged dirigibles, but also in a dangerous game of the heart…

This is the third installment in Dryden’s Steam and Seduction steampunk romance series. (I reviewed #2 here.) While the first two books weren’t perfect, I enjoyed them because the characters were interesting and the plots unique. Unfortunately, I didn’t enjoy Gilded Lily as much.

The heroine is Frederique Murcheson. You may remember Mr. Murcheson from previous books as part of the English spy network, using his status as a successful merchant for cover. His daughter Freddie looks like a typical young society lady, except for her secret life dressing as a man and working as a tinker. The hero is Barnabus Smith-Grenville, who we first saw in the previous book when he entered the Sky and Steam Rally in order to find his missing brother. Barnabus has since joined the spy network, and his first assignment is to watch over Freddie. He discovers her secret life as a tinker, and then gets involved when Freddie starts investigating exactly what her father really does.

Freddie is a great character. She’s extremely intelligent and craves a challenge, but her father tries to restrict her activities and make her act as a proper lady. She chafes at these limits, which is why she starts sneaking out, with the help of some friends, to be Fred the tinker. I love Freddie’s spirit, and I love her curiosity about the world. It’s what drives her to start investigating what her dad is doing. She is definitely too impulsive for her own good sometimes, but to me that read as just a matter of inexperience. She has been young and sheltered, and at first she doesn’t understand how dangerous and complicated the world can be. She is a quick learner, however, and clearly would make an excellent spy, or most anything else she set her mind to, to be honest.

Freddie is about the only thing this book has going for it, though. The biggest stone dragging things down is Barnabus. He is completely and utterly boring. When Freddie first meets him she compares him to pudding–bland and unexciting. Later she revises her opinion, but I think her first impression was spot-on. Barnabus stumbles into the spy business mostly because he wants to search for his brother, who he suspects is also a spy. He has no particular aptitude for spying or even interest in it. He does manage to keep up with Freddie and discover her secret life, but that’s one of the few times he displays any cleverness. He is a total buzz kill, too. He’s doesn’t appreciate jokes, is always scolding Freddie for not doing what her dad wants, etc. He isn’t good at witty repartee, nor is he particularly brave. In other words, if he has any strengths, he doesn’t discover them in this book! I like the trope of the seemingly average person who discovers what makes them special during the course of a story, but that’s not what happens here. I saw little evidence of Barnabus’s uniqueness or growth by the end. And the fact that Freddie thought he was so amazing worked against the book, too. It felt forced and totally against her character. I was actually disappointed in her that she would settle for someone who was clearly not her equal. All I could envision for the future was her steamrolling over Barnabus in all decision making, going off to have exciting adventures while he tagged along complaining and making vaguely frowny faces.

There was also too much that didn’t make sense. The world building of this book wasn’t entirely consistent with the previous stories. For instance, when comparing Freddie to the last heroine, Eliza, it doesn’t seem like the two women come from the same world. Eliza is still subjected to gendered expectations, but she went to a university, learned how to be a mechanic/tinker, competes in the Sky and Steam Rally, etc. But Freddie has to sneak around dressed as a man, is expected to marry soon, and is definitely treated as the weaker sex. I think part of the difference can be attributed to her overprotective father, but Freddie’s world still seems more restrictive than Eliza’s. For example, Freddie’s friend Sophie (who I suspect may be the heroine of a future book) is also kept sheltered by her parents and is primarily valued for her marriageability. Perhaps the colonies, where Eliza lives, are simply more egalitarian than Europe, but if that’s the case the book doesn’t do much to make that difference clear. Freddie and Barnabus’s adventures are pretty preposterous, too. They easily eavesdrop on and follow Mr. Murcheson, who’s supposedly an experienced spy. They sneak into what is likely the most top secret location in all of England with no problem. There is more that I can’t discuss without giving tons of spoilers, but trust me when I say things get kind of far fetched.

I most definitely did not believe in the HEA for Freddie and Barnabus. It looked more like settling than an equal, loving partnership. I actually think Freddie belonged with another character. I don’t want to name him because his appearance is part of the plot, but right from the moment he entered the story he bickered with Freddie, stood up to her, was perceptive and mysterious, and generally injected some much-needed life into the adventure. THAT guy could have been a match for Freddie, and I would have preferred to read their story. The good news is I think he’ll be the hero of a future book–hopefully his heroine will be up to the challenge.

This book is available from Berkley. You can purchase it here or here  in e-format.  This book was provided by the publisher in exchange for an honest review.