It's Beginning to Look a Lot Like...Love!

A man gives the gift of trust and receives a second chance at love in return. A woman helps to heal the wounded heart of a soldier. A couple finds that true love knows no distance. And a young widow learns that there can be two great loves in a lifetime. Love, romance and passion come together in this collection of four seasonal shorts.

Sometimes I like to pull out Christmas stories in the summer to get away from the heat, if only in my mind. This collection is available as one anthology or as individual releases in e-format. I’ve included links to both formats, for your convenience. 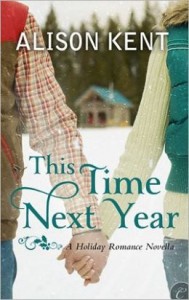 This Time Next Year by Alison Kent

Brenna Keating is on her way to spend Christmas with her grandmother when treacherous roads and a skittish deer put her car in a ditch. Riding to the rescue—literally—is Dillon Craig, a reclusive doctor who insists she weather the storm in his cabin.

Since returning from Afghanistan where he treated wounded soldiers on the front lines, Dillon’s made it a point to avoid any emotional involvement. But his unexpected guest has him dangerously close to breaking his own rules.

Brenna has a plan for her life—until she’s stranded for three days with Dillon. Soon, the chemistry sizzling between them forces her to reexamine her priorities. The man is gorgeous, if taciturn, and a true hero in every sense of the word. No woman in her right mind could resist him, and so Brenna doesn’t—even though she can’t stay…

Brenna and Dylan really drew me in. I loved their friendship and how the romance didn’t progress until both of them were ready. The ending felt a bit rushed, but that may just be because I wasn’t ready for the story to end. 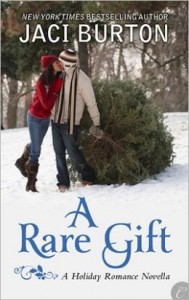 A Rare Gift by Jaci Burton

With a disastrous marriage behind him, Wyatt Kent has no interest in getting involved with any woman, let alone his ex-wife’s younger sister. But when Calliope Andrews hires him to build an addition onto her day care center, Wyatt can’t help but notice she’s a desirable woman, as warm and funny as his ex was cold and aloof.

Calliope fell hard for Wyatt the first time he walked through the door of her family’s home, and can’t believe her sister let him get away. He’s still the star of all her fantasies, and she’s determined to prove to him she’s nothing like his manipulative ex. Wyatt may be all business, but Calliope sees the way he looks at her when he’s supposed to be working…

It’s not long before Wyatt and Calliope are keeping each other warm on cold December nights. But it’s going to take a Christmas miracle for Wyatt to put his trust in love a second time.

I can’t help being a little bothered by the premise. I wonder how heroine’s sister feels about baby sister dating her ex-husband? I realize time has passed and etc, but I was a little hung up on that. I liked Calliope but Wyatt was a little…one dimensional. I generally enjoy Burton’s stories, but this one fell a little flat. 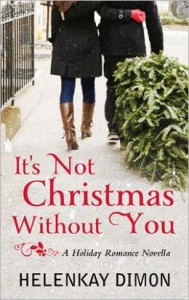 It’s Not Christmas Without You by HelenKay Dimon (Holloway, Book 1)

Carrie Anders officially broke up with Austin Thomas when she accepted a dream job in the city. Unofficially, she misses him and is tempted to sneak back to her West Virginia hometown to see him. That’s why this year, she’s not going home for the holidays. Her heart can’t take any more mornings-after where nothing has changed–and Austin has made it clear he’s not interested in relocating.

Austin’s been waiting for Carrie to realize she can’t live without him. But when he hears she’s not coming home for Christmas, he decides to take action. If Carrie won’t come to the country, he’s going to bring a piece of the country to Carrie–in the form of a Christmas tree lot just minutes from her apartment. He’s certain daily meetings will entice her to come home with him, this time for good.

Their attraction is as hot as ever, but with such contrary Christmas wishes, can either of them get what they really want this year?

I love reunited lover stories and this one hit all the right notes. Both Carrie and Austin act a bit immature at times, but I was able to overlook that in favor of the sweet romance. 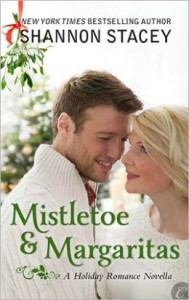 Mistletoe and Margaritas by Shannon Stacey

Claire Rutledge still believes in love, despite losing her husband. So, after two years, she’s not surprised by the steamy dreams telling her it might be time to start moving on. But she didn’t expect her friend Justin to have the starring role.

Justin McCormick has loved Claire since the moment he first saw her, but his best friend got there first. Now that Claire is ready to move on with her life, Justin is finding it harder than ever to hide his true feelings. And when they both get caught up in the holiday spirits at a party, their simmering mutual attraction boils over into a night neither of them can forget…

This was such an emotional read for me. I love that Claire stood her ground and forced Justin to look at his life and his choices. I also sobbed like a damn baby at certain parts. Such a wonderful read.

This is a great collection. I enjoyed all four novellas. Each touched me in some small way. I found myself emotionally invested in all four couples, no small feat considering they’re all relatively short stories.