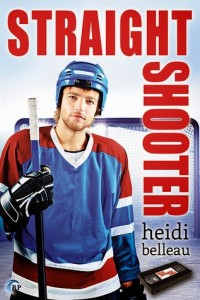 "This macho jock has a crooked little secret."

College hockey player Austin Puett is in trouble. Unless he starts treating his flamboyantly gay roommate with respect, he'll lose his room and his job at Rear Entrance Video. But Austin's got a not-so-straight secret of his own: nothing turns him on more than insults implying he's gay-even though he's definitely not -and all his old coping methods have stopped working.

But meeting Liam Williams, the real person behind Puck, confuses Austin even more. Liam really seems to like him as a person, and Austin likes him back. And while Gay for Pay's okay, what does it make Austin if he still wants Liam when the cameras aren't rolling?

Austin is a hockey player and has always been a team player. He’s sees life as black and white so he doesn’t understand the fact that he pops a boner every time someone calls him a fag or pussy. He knows he’s not gay so why does that do it for him every time? He desperately wants to cure himself of his problem but he doesn’t know how. He works part time at a video store that was recently turned into a gay porn video store. One night a guy returns a DVD entitled Straight Sub Setup 4 Austin thinks he’s figured out a way to “fix” his problem . He takes it home to watch and realizes this is what he needs. He needs someone controlling and humiliating him and having sex with him…with his consent yet…then he can blame it on the setup. Huh? He wants it, he just doesn’t want to admit he wants it. He’s straight but with a definite kink that’s ruining his life.

This book had an intriguing blurb so I was looking forward to reading it. I definitely wasn’t disappointed.

This is a straight up GFY story. It takes Austin quite a while to embrace his kink and along that road we got plenty of humiliation & self-torture it did go on for longer than I expected it to, I must admit, but in the end it just showed how it all truly controlled his life and not in a good way. When Austin and Liam finally start working together to deal with Austin’s kink neither man knows what will be in store for them in the long run. I believe that Liam definitely has his eye on Austin from the start but it took Austin awhile to really see Liam for the man he was. Once that happened he could embrace him and that eventually helped him to embrace himself.

I wasn’t sure the pair was really going to end up together as even when the pair was together it wasn’t a hearts and roses type of love. The author, however, did a great job of putting them into a place in life where they both got what they wanted from the other and found love at the same time. It was a great ending and I really enjoyed the book.

My first full length read by this author and it won’t be my last, that’s for sure.

One response to “Review: Straight Shooter by Heidi Belleau”