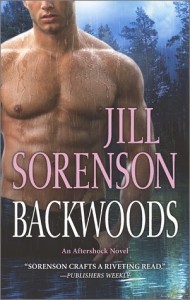 When plans for a wilderness retreat with her teenage daughter Brooke go awry, Abby Hammond reluctantly pairs up with Brooke's stepbrother and his dad, Nathan Strom, for the weeklong trek. The only thing Abby has in common with the bad-boy former pro athlete is that their exes cheated with each other. That…and a visceral attraction that's growing more complicated with every step through the picturesque woods.

Nathan's wild-card reputation lost him his career and his family. After years of regret, he's ready to fight for what truly matters—and that includes Abby's hard-won trust. When Brooke goes missing, Nathan knows he's her best and only hope of rescue. But the deeper into the rugged mountains they go, the more dangerous the territory will prove—for their safety and for their hearts.

Abby isn’t the hiking/backwoods type. She likes to be clean, she likes her phone, she doesn’t like to sweat, she likes to look good. You know, normal stuff. 🙂 Her daughter Brooke is totally the opposite. Not that she doesn’t like to look good or stay clean, but she’s an athlete and loves the great outdoors. She’s decided that she’s going to take the family hiking. Now “the family” is a bit odd. We have Abby who is Brooke’s mother and then her father, Ray, who is a total dickwad who cheated on Abby with one of his clients. Ray got married to the Lydia, the client. Lydia brought her son, Leo, to the marriage. Leo’s dad is Nathan who also got screwed by divorce when Lydia cheated on him. Wow, total soap opera materiel, right? But it’s not.

So Brooke plans the week-long trip with Abby, Ray, Lydia and Leo to bond. Lydia supposedly twists her ankle and bows out of the weekend with Ray.  She then calls Nathan to step in as parent. Leo doesn’t get along with his dad so he’s not happy about the change. Brooke is disappointed as once again her father flakes on her. Abby isn’t happy with the hiking but she thinks Nathan’s hot so that’s a bonus.

The foursome strike out on their hike and things go well. They run into some hunters that are creepy and then a Croation man and his girlfriend who are just weird. They get robbed and Abby, who is a complete nervous Nelly about things, starts to freak out. She had read about some girls who have gone missing in the same woods and she’s not feeling safe. She is feeling some things toward Nathan and she likes that of course and he seems to like her as well but neither want to make a move in front of the kids – even though Brooke is practically pushing them together. They’re all having a relatively good time until Brooke goes missing. They track her but Nathan wants to go for help. Abby isn’t about to leave her daughter when she can trail her and since Nathan knows that Leo will stay with Abby, and he fears for his safety, he decides that he’ll go with Abby as well. They find the hideout but things go wrong from there.

Backwoods is the kind of book that has you on the edge of your seat almost the entire time. I obviously knew that something was going to happen because of the blurb so I was constantly tense while anticipating it. I really loved that suspense.

The actual abduction and subsequent story, while intense, almost felt like it was a let down after the high anticipation. The abduction is horrible and the people who take her are bad people – maybe not so much the younger guy but still bad, imho. The older guy is a nasty piece of work but in the end it seemed that Brooke was rescued with a fair bit of ease and it all worked out. I guess I was just thinking the situation would all last a bit longer and be a bit more difficult to get out of and it was a bit of a let down. Brooke then makes a TSTL decision near the end of the book that really surprised me as she seemed so smart and that didn’t set well with me. Not only did she put herself back into a precarious position but then made an uber stupid move with one of the bad guys that I just couldn’t see her making. IDK, it seemed out of character for her as I didn’t think she would do those things.

In the end I think the reason this isn’t getting a higher rating is because of Abby. I couldn’t connect with her and frankly couldn’t figure her out. She seemed like a totally high-strung woman and kind of paranoid at one turn and then was this totally cool mom the next, then was supposed to be kind of a sexy woman as well. I didn’t feel the sexy woman or cool mom part at all. Yes, she loved Brooke desperately but I couldn’t see her relaxing enough to really let Nathan in. He was all that was hot and wonderful, despite his past, and I really liked him…just not with Abby.

Unfortunately I didn’t care for the romances – between either Nathan and Abby or the odd relationship that was going on with Brooke and Leo. But, overall, I liked the suspense and I liked the family bonding that occurred during the book.

One response to “Review: Backwoods by Jill Sorenson”