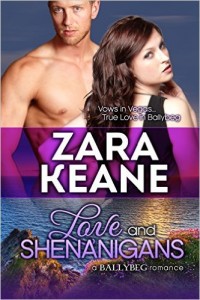 Vows in Vegas...True Love in Ireland.
Three days before leaving Ireland on the adventure of a lifetime, Fiona Byrne returns to her small Irish hometown to attend the family wedding from hell. When she discovers the drunken vows she exchanged with the groom during a wild Las Vegas trip eight years previously mean they're legally married, her future plans ricochet out of control. Can she untangle herself from the man who broke her heart so long ago? Does she even want to?

Gavin Maguire's life is low on drama, high on stability, and free of pets. But Gavin hadn't reckoned on Fiona blasting back into his life and crashing his wedding. In the space of twenty-four hours, he loses a fiancée and a job, and gains a wife and a labradoodle. Can he salvage his bland-but-stable life? More importantly, can he resist losing his heart to Fiona all over again?

Tracy’s review of Love and Shenanigans by Zara Keane

Everything is going swimmingly in Gavin’s life when all hell breaks loose. He’s been dating the same woman for the past 7 years or so and while they don’t have a grand passionate love, it is stable and consistent. Her parents make him a little crazy but it’s all good. Well, it’s all good until his fiancé, Muirann, shows up with a puppy that her father bought her. Only Muirann has things to do and she expects Gavin to take care of the ball of fluff that constantly pees on things and rips things apart with his teeth. Gavin’s patience is definitely being tested.

Fiona is Muirann’s cousin and was talked into being in Muirann’s wedding by her aunt – also Muirann’s aunt. Fiona wants nothing more than to go on the world tour she has planned and get out of Ballybeg. She loves her aunt Bridie, who raised her after her family was killed in a car accident and was the one who talked her into being in the wedding, there’s no love lost between Fiona and Muirann. This is proven when Muirann gives Fiona her gown – that’s snot green and looks like a mermaid dress – that’s too small. Fiona believes that Muirann purposely gave the seamstress the wrong measurements just to embarrass her. Muirann never passes up an opportunity to make Fiona feel like a fool. Fiona ends up out of the wedding party (thank God) but still has to go to the wedding. While getting ready for the wedding Fiona and her best friend, Olivia, start going through old photos. Olivia finds one of Fiona and Gavin kissing (shock!) – then finds a marriage certificate!! Fiona assures her that it’s just a piece of paper because their marriage in Vegas was fake, but when Olivia insists on looking up the info to prove that it’s not real she finds that it’s actually a legitimate marriage certificate and that’s Fiona’s truly married to Gavin and has been for the past 8 years! Wow. Fiona doesn’t know what to do.

Needless to say the wedding between Muirann and Gavin doesn’t take place. During the upheaval at the church Fiona’s aunt Bridie is hurt and breaks her hip. Fiona is conned into staying in Ballybeg to take care of Bridie after her hip replacement and run her book store. She also needs to seek a divorce from Gavin but in Ireland that takes about 4 years if not longer. While Gavin and Fiona say that they both want the divorce Gavin starts to look at his once neglected feelings towards Fiona and finds that there’s still more than a spark there. Fiona tells herself that she was a fool to fall in love with Gavin once before and it won’t happen again but love has a way of proving her wrong.

Love and Shenanigans is a hilarious story that I very much enjoyed reading. The beginning of the story is so incredibly ridiculous (and also ridiculously funny) but frankly I could see it all happening in my mind. Keane has a way of storytelling that brings it all to life in your head. Add to that the Irish colloquialisms that are thrown in and you almost feel like you’re in the thick of it. I found myself not only laughing out loud during the beginning of the book but reading parts of it to my friend.

Now the book did settle down as it went on and things weren’t quite as wacky but it was still just as good. The banter was fun and funny and the attraction between Gavin and Fiona was undeniable. I wanted them to be together and happy for years to come. Besides the romance there was also the homecoming of Fiona to Ballybeg. This is where she’d grown up but as her family had died it held bittersweet memories. It was hard for her to be back but she realized how much she loved it.

We also got a secondary storyline that had to do with Fiona, Bridie and Bridie’s brother – Muirann’s father, Bernard. When Bridie and Bernard’s mother was alive she had told them that the inheritance would be split equally between them and their other sibling (Fiona’s dad) but when their mother died the majority of the estate went to Bernard leaving the other two with hardly anything. When Fiona finds this out she starts to do a little investigating into her grandmother’s will. While I liked this portion of the book I didn’t really see the point of it all. Yes, it showed what a bastard Bernard was but as readers we’d already figured this out.

Overall I found LaS to be a good read and one I recommend if you have a crazy sense of humor like I do. I don’t think this book is for everyone as I don’t think some would find the madcap happenings to be funny. If you do like to laugh while reading your romances this is a book for you.

This title is available from Beaverstone Press, LLC. You can buy it here or here in e-format. This book was provided by the author in exchange for an honest review.