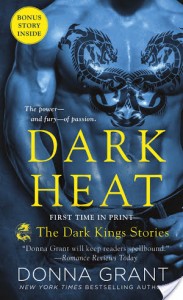 The Dark Kings are sworn to defend an ancient legacy of dragon magic. But their fiercest challenge lies in the modern world, where a woman's love conquers all. These are their stories.

Fueled by ancient magic—and enflamed by human desire—the Dragon King known as Hal can transform himself at will into one of the legendary winged creatures he is sworn to protect. But one thing he can never do is fall in love…with a mortal woman.

Everything has gone wrong in Cassie’s life and she’s down on her luck. Her brother, Dan, who lives in Scotland has agreed to let her live in his cottage which happens to be near Dreagan land – the land of the Dragon Kings who are dragon shifters.

Cassie manages to make it to Dan’s cottage but can’t make it inside the house during a blizzard. She almost dies in her car but is saved by Dragon King Hal. Hal is immediately drawn to Cassie and when she wakes up, she’s drawn to him as well. They can’t seem to stay away from each other, though Hal does try. He and his fellow Dragon Kings had had a spell put on them many years before so that they would feel nothing towards humans (their kind had been betrayed by a human in the past). Unfortunately Hal’s feelings are blowing the spell right out of the water. He becomes determined to stay with Cassie no matter what it takes.

The dark immortal warriors were never meant to experience human desire. But when Guy, a member of an ancient order of shape-shifting warriors, meets Elena—a mere mortal whose beauty and blind ambition shakes him to his core—all bets are off…

Sloan insists on taking her new employee caving, much to Elena’s dismay. Elena’s not really into it but Sloan insists and since Sloan is her new boss she decides to humor her. Unfortunately Sloan also insists that she needs to investigate a shaft that she’s found once they’re deep in the cave. That doesn’t turn out so well for Sloan and leaves Elena alone in a cave she can’t get out of with a severely sprained ankle. Luckily she is saved by 3 Dragon Kings who are all big and fierce but also very kind – especially one, Guy.

Guy is almost immediately smitten with Elena but Con, the King of the Dragon Kings, knows something more is going on with Sloan and Elena being on Dragon King land. He fears that someone knows about them being dragon shifters and they must put a stop to it before any of their secrets get out. They decide to investigate Elena’s place of work, PureGems, in London, to see if they can find who knows what.

While all the decisions are being made Guy and Elena are getting closer together and quickly falling in love. Guy wants nothing more than to keep Elena safe but she knows she must help find anyone who has it out for the Dragon Kings and agrees when they decide to make her bait.

For centuries, the Dragon Kings have hidden their shapeshifting powers from the world. But when a mortal enemy threatens to expose them, the warrior Banan must leave his secret lair in the Highlands to risk his life for the dragons within—and resist the temptations of human love.

PureGems’ London base is run by Richard Arnold. His secretary is Jane Holden. Banan, a Dragon King, is acting as a chauffer for the company so that he can see who needs investigating further. Jane meets Banan when he drives her to the airport. Almost immediately they’re attracted to each other and Banan approaches Jane to have dinner with him. She eventually finds out that he and his friends need info about Richard Arnold and she agrees to help, but then believes that Banan only approached her for her help – not because he liked her. Nothing could be further from the truth.

Though the spell had been cast on the Dragon Kings so that they wouldn’t feel for humans, that apparently doesn’t apply when it comes to the Kings’ fated mates. Jane is Banan’s and he doesn’t want to let her out of his site once he realizes that she is his one and only. He can’t be with her at all times, however, and soon the person who knows more than he should about the Dragon Kings is kidnapping Jane.

The three first stories in the Dark Kings series were pretty entertaining. Yes, the stories move fast and the couples fall in love quickly but when you’re fated to be together, why wait, right? lol Even though each story had the insta-lust theme and the pairings were fast it all worked for me.

In the second book we started to see what would be a continuing story ARC and that made the story that much better. I can only assume that the next novel continues where book 0.3 (Dawn’s Desire) left off and we’ll eventually find out who the villain is. I gotta be honest, I’m dying to know.

There is a bonus story in the book called Passions Claim that continued Balan and Jane’s story as well as showed us a big problem in Elena and Guy’s relationship. I admit I don’t normally enjoy reading about tension between lovers after they’ve had their HEA but it is reality and this one had a happy ending so it was all good.

If you don’t mind fated mates and you’re a fan of dragon and shifter stories then this book is definitely one you need to read.