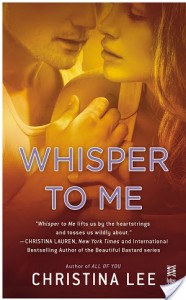 Reviewer: Tracy
Whisper to Me by Christina Lee
Series: Between Breaths #3
Also in this series: All of You, Before You Break, Whisper to Me, Promise Me This, Promise Me This, There You Stand, Two of Hearts
Publisher: Penguin
Publication Date: May 20th 2014
Format: eARC
Genres: New Adult
Add It: Goodreads
Amazon | Barnes & Noble | The Ripped Bodice | Google Play Books

At college, Rachel has a reputation for being a sarcastic flirt with a thing for star athletes. No one at school knows that she’d had her heart ripped to shreds by her high school sweetheart, who’d driven them both off the side of the road on a borrowed motorcycle, and then abandoned her. No one knows the real Rachel Mattson—except one person…

Ever since he helped nurse his sister’s feisty best friend back to health, pierced bass player Kai Nakos has been head over heels in love. But the supposed bad boy can’t risk letting Rachel know the truth—especially now that the two of them are back in their hometown for the summer, together for the first time since the months following that fateful night. Never mind that Rachel’s ex is back, groveling for her forgiveness.

Shaken by her ex’s return, Rachel finds herself turning to the one guy she knows she can trust. Kai is willing to hide his feelings for her, just to have Rachel touch him again. After all, this is only a temporary fling.

Until it becomes something more.But maybe it had been more all along...

When Rachel was in high school she was in a motorcycle accident with her boyfriend Miles. While Miles came away with a few bumps and scrapes Rachel ended up with a traumatic brain injury. It took her many months in rehab to be completely functional again. When she was back on her feet she headed off to college and hasn’t been home often since then. She’s soon to be a Senior and not really happy about being home for the summer but her mother needs Rachel’s help moving her business to a different location. She’s staying the summer with her best friend Dakota not knowing when she made the plans that Dakota’s brother, Kai, would be in residence as well.

Kai is a young man who is in flux. He is a musician who has been studying music theory in Amsterdam as well as working at a recording studio. An incident and misunderstanding at the recording studio causes issues and that means he’s now back home for the summer. He’s staying with his sister as he works for his family’s casino. Kai is thrilled to see Rachel home. Since he was by her side, as her friend, for the majority of her rehab he came to know her better and eventually fell completely in love with her. He’s never said anything to her or to anyone about it and has tried not to show his feelings. During an emotional moment Rachel and Kai kiss and go a bit farther. Kai is thrilled but doesn’t want to scare Rachel off. He tells her he’s there for her whenever she needs a shoulder to cry on. She takes him up on his offer.Rachel and Kai start spending their nights together doing wonderfully erotic things but not actually going all the way. They get closer and closer emotionally and their chemistry is off the charts.  Neither knows how the other is feeling and they’re both afraid to mess up their friendship. In this case having a close friendship might actually count in the con column rather than the pro column.Where to begin with telling you how much I liked this story?? There were so many things to like I’m not sure where to start.

Kai – he is wonderful. He’s got it goin’ on in the looks department, that’s for sure. He’s half Dutch, half Native American and has piercings in awesome places. How could I not lust after this guy? Lol As sweet and kind as Kai could be – and he really could be – he was a dirty talker in bed and that just made his times with Rachel that much more incredible. He’s smart, fun, funny, loves his family and would do anything for Rachel. Completely sigh worthy in my book.

Rachel is gorgeous and a really good person who’s made some bad decisions in her life. After the accident she was thought of in town as the girl with the brain injury – she hated it. Going off to college she could remake herself into anyone she wanted and she did. She was the party girl who got attached to no one. Unfortunately her worlds collided which caused a bit of strife with all of her friends. She was a bit of a lost soul and Kai helped her find her way.

The friends to lovers story that Lee gave us was really pretty outstanding, I must say. The writing, the story, the secondary characters that all played a role in the romance, the hero and heroine…everything was damned near perfect. The angst in this one was pretty low, which I loved and it made the book that much better.

This has been a wonderful series so far and this was a perfect addition.  It’s one book I’ll definitely be recommending to my friends – if they haven’t read it already – that’s for sure.

2 responses to “Review: Whisper to Me by Christina Lee”