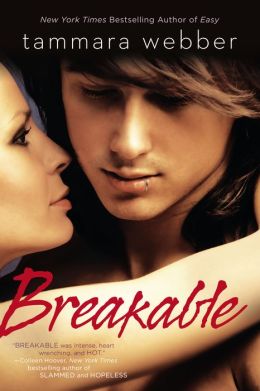 TG‘s review of Breakable (Contours of the Heart, Book 2) by Tammara Webber

He was lost and alone. Then he found her.
And the future seemed more fragile than ever.

As a child, Landon Lucas Maxfield believed his life was perfect and looked forward to a future filled with promise — until tragedy tore his family apart and made him doubt everything he ever believed.

All he wanted was to leave the past behind. When he met Jacqueline Wallace, his desire to be everything she needed came so easy…

As easy as it could be for a man who learned that the soul is breakable and that everything you hoped for could be ripped away in a heartbeat.

We first met Landon Lucas Maxfield in Tammara Webber’s Easy, but we didn’t really get a complete picture of him. While Easy was definitely a romance, it was also Jacqueline’s tale. This is Landon’s story. Told in alternating past and present chapters, the book details his life prior to meeting Jacqueline, as well as his point-of-view in Easy, without being repetitive. I didn’t feel like I’d just re-read Easy from Landon’s point-of-view, but more like I was reading his story with little bits of Easy woven in.

New Adult is a genre primarily dominated by first-person point-of-view. The recent trend is to write the tale from the heroine’s POV then release the same novel from the hero’s POV down the road. I don’t necessarily dislike this, but I feel like if I read the story once, I don’t need to read it again. However, Webber takes a different route through the trend, following it in a rather innovative way. Instead of just re-writing Jacqueline’s story from Landon’s point of view, stopping at familiar landmarks along the way, she told what was mostly off-page in Easy, while still incorporating the more familiar scenes. Nothing seemed tired or worn out in it, and it was refreshing to recognize my favorite scenes from Easy, along with the new material.  Overall, Tammara Webber did a great job in making sure her readers got a companion piece, instead of a recount.

That is not to say that you have to read Easy before you can read Breakable, or you won’t understand whats going on. Webber made sure that Breakable could stand alone or with Easy. Because it is a strong independent novel who doesn’t need a prequel to make it whole.

My only quarrel with the story-telling was that it seemed a little rushed during Lucas’s chapters (those retold from Easy), like she was in a hurry to get to the next Landon chapter (those from his teen years), but I didn’t want to throw it out the window or demand my money (ha!) back by the end. I did want to see a little bit more of his emotions and thoughts while interacting with Jacqueline though. I think that would have made it complete.

I’d definitely recommend this to my friends without hesitation (all of them. Muahaha).

We have a copy of trade paperback copy of BREAKABLE to give away. Use the Rafflecopter widget below to enter. US Only.