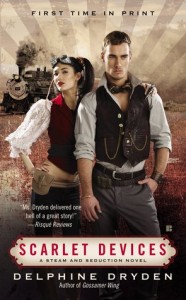 Fresh from university, Eliza Hardison is determined to crusade for workers’ rights until her cousin Dexter, the Makesmith Baron, prevails on her to represent Hardison House in the American Dominion Sky and Steam Rally.

The competition is fierce, but only one opponent really matters to Eliza. Dexter’s protégé, Matthew Pence, was always like a big brother to her. But now she’s grown up, and Matthew has made a break from Hardison House with his own business venture—and made his own entry in the rally.

Matthew intends to win while keeping Eliza safe on the perilous route from New York to San Francisco. As the threats escalate through treacherous skies and uncharted American wilds, though, Eliza and Matthew must work together, discovering a bond deeper than either could have imaginedbut is winning the rally more important than winning at love?

I am a growing fan of steampunk romance and have been eagerly reading whatever I can get my hands on, so when the opportunity to review Scarlet Devices came up, I jumped at the chance. I read book 1 of this series, Gossamer Wings, and while it helped me understand the world a bit better, I don’t think it is absolutely necessary for understanding this second book.

Book 2 focuses on Eliza Hardison, cousin to Dexter Hardison, the hero from book 1. Eliza is young and very smart. She’s an academic primarily, though she’s also exceptionally handy with tools and knows her way around the various gadgets and vehicles steampunk is known for. Dexter presents her with the opportunity to represent his company in the Sky and Steam Rally, a kind of cross country race by car and air ship. After some persuading, she finally accepts, in large part because she wants to beat Dexter’s friend and protege, Matthew Spence. Eliza and Matthew have known each other for years and always been at odds with each other, and she wants to prove that she’s not an incompetent kid any longer. For his part, Matthew feels strangely protective of her, and while he wants to win, he also feels compelled to keep Eliza safe. They set out with a large group of other racers, but they quickly realize that someone is trying to sabotage the race. Eliza and Matthew have to solve the mystery and stay alive long enough to stop the villain.

While I didn’t exactly love this book, I did enjoy it quite a bit. One of my favorite things is the way that Eliza has to fight against sexism and discrimination. In the world of this series, women are allowed some freedoms but are clearly still seen as the weaker sex. Eliza has the added burden of being very young, so she is rarely taken seriously. She doesn’t want to be a social outcast, but she also doesn’t want to just roll over and do what society expects of her. It was fascinating to see her struggle with this issue and ultimately prove her worth. In a way, this is partly a coming of age story.

While Eliza is occasionally kind of silly and naive, I still found her likeable. She’s tough, tougher even than she realizes, and she is willing to learn from her mistakes. Matthew is a great foil for her, too. He’s smug and cocky at the beginning of the book. He acts a bit superior to Eliza, thinking he’s so much more capable than her because he’s older and wiser. But thankfully, Matthew grows throughout the book, coming to realize that Eliza is much more competent than he knew. He manages to protect her without demeaning her, and he respects her strengths without trying to change her into something she’s not. I especially love that at the end, he’s ready to take Eliza on her terms, even if it wouldn’t be his first choice, because he respects her goals for the future.

Eliza and Matthew have some sexy chemistry, and I adored the way Eliza was so frank about sex. She isn’t experienced or overly forward, but she’s a practical woman and approaches sex with the same curiosity and forthrightness that she approaches everything else. The scene where she loses her virginity was one of the more fun “deflowering” scenes I’ve read–in real life, sex can be funny, especially the first time, and Eliza and Matthew are good at making each other laugh.

She was already laughing, gasping against his shoulder at how ridiculous it all was. He stilled his hips and grinned at her, kissing her a few times.

The book isn’t entirely perfect. Eliza and Matthew do fall in love awfully quickly, though it’s made more palatable since they have known each other for a long time. A bigger problem is the world building, which I also had a little problem with in book 1, too. For instance, it seems a bit inconsistent that women are able to go to school, work in a workshop, etc but then are still expected to conform to more rigid rules about propriety. It felt a little incongruous. And why on earth would Dexter want Eliza to enter this race, which is clearly dangerous and involves an awful lot of unchaperoned time for a young virgin? I don’t think I have a good handle on the geopolitics of the world, either. In both books, the main characters were from the “American Dominions,” which I did gather were basically British colonies, but I wasn’t clear on what all the national agendas were. (I later found out that Dryden has further explanation of the world on her website, which does help.) The villain in Scarlet Devices is also pretty over-the-top, almost cartoonishly so. I couldn’t understand why his plan wouldn’t have been discovered before, especially since Matthew is able to puzzle it out so easily.

Still, I’m enjoying the series and will keep reading!

This title is available from Berkley.  You can buy it here or here in e-format.