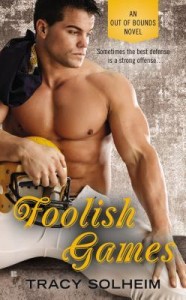 Will Connelly is completely blindsided when he’s called to a Senator’s office and told that he’s someone’s father. Not only is little Owen’s father but Owen needs a blood transfusion to save his life and the doctors are positive that Will’s blood will provide the antibodies to save the baby’s life. Will is pissed that he has a son and no one told him about it but especially at the mother, Julianne.

Julianne Marchione had a one night stand with Will and never planned on telling anyone who Owen’s father was. Now not only does she have to tell but endure Will’s wrath for not having told him. Not only is Will mad but he insists on getting married so that he can be near to and bond with his son. Julianne and Will get married with a prenup and an already signed separation agreement in hand.

The attraction that Will and Julianne feel for each other can’t be denied and the couple are acting on their passion in no time. They create a wonderful little family unit but Will has trust issues that he can’t get past with Julianne. She’s falling in love with him but he’s not sure what to make of it all.

When it comes to light that Will is subpenoed in a racketeering scheme and he believes that Julianne sold him out for money, Will can’t get away fast enough but is he correct in his beliefs or did he just walk away from the best thing that had ever happened to him?

This was a great follow up to the first book in the Out of Bounds series. I had some issues with the first book but still liked it. This was definitely a better read for me.

Will was the strong and silent type and had serious trust issues. He also had self-esteem issues as well. Despite those issues I really liked the guy. He could be a bit brash but seeing him with Owen made me think the man was just a big glob of goo on the inside that hard shell exterior. When he loved he loved with his whole heart and I had to admire him for that. Now, did he jump to conclusions with Julianne? Oh yeah he did and he wouldn’t let her explain which I found frustrating. He wouldn’t even talk to his Mom as he felt she would tell him what Julianne had said. Stubborn thy name is Will. Seriously! He was, however, one that would admit his mistakes when he made them and made up for them well, I must say.

Julianne came across to Will as an airhead and a fly by the seat of your pants girl. She was those things in some respects but she was also a savvy businesswoman and intelligent. She was a devoted mother and would stop at nothing to do the best for her son. She definitely made mistakes during the book – some really ridiculous ones too but she had a huge heart and I really liked that about her. She may do dumb things but they had the right thoughts behind them.

The romance had its ups and downs but it was pretty good overall. It was originally based strictly on sex but Will and Julianne got past that eventually. The supporting cast in this story were wonderful. We got to see more of Shane and Carly, Will’s mom Annabeth, Will’s GM Hank Osbourne and his daughter Sophie as well as Will’s best friend Gavin and fellow teammate Brody. All of these well written characters played a part and contributed to make this a story worth reading.

One response to “Review: Foolish Games by Tracy Solheim”