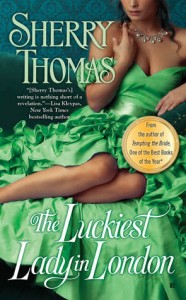 Felix Rivendale, the Marquess of Wrenworth, is The Ideal Gentleman, a man all men want to be and all women want to possess. Felix himself almost believes this golden image. But underneath is a damaged soul soothed only by public adulation.

Louisa Cantwell needs to marry well to support her sisters. She does not, however, want Lord Wrenworth—though he seems inexplicably interested in her. She mistrusts his outward perfection and the praise he garners everywhere he goes.But when he is the only man to propose at the end of the London season, she reluctantly accepts.

Louisa does not understand her husband’s mysterious purposes, but she cannot deny the pleasure her body takes in his touch. Nor can she deny the pull this magnetic man exerts upon her. But does she dare to fall in love with a man so full of dark secrets, anyone of which could devastate her, if she were to get any closer?

The marquess of Wrenworth had a comfortable but unlovable childhood. His mother didn’t care for his father while she was more than attentive to him when his father was present she otherwise ignored him – as did his father. When his parents died and he came of age he worked very hard to be The Ideal Gentleman but cut himself from even the possibility of love.

When Felix meets Louisa he’s immediately struck by lust. He can tell that she’s playing a part because he does it himself but he’s still fascinated by her. He sets out to make her his mistress but when she refuses he soon proposes marriage. They make a good match but when Felix realizes that he’s feeling more than he should ha backs off and even becomes cruel.

For Louisa she’s extremely happy when she marries Felix as she’s just as much in lust with him as he is with her. She knows she can’t trust him as far as she can throw him but she thinks as long as they’re compatible in bed the rest will fall in line. How wrong she was.

I have to say I love Thomas’s books and get very excited when I see that one is coming out. This one was as wonderfully satisfying as I knew it would be.

This is such a different kind of story. Two people who are basically imposters as they really aren’t who people think they are. They recognize the others falsehood’s almost immediately but that doesn’t stop them from falling in lust. They aren’t afraid to speak of their lust and when this brings Felix to propose she be his mistress we as the reader almost felt that she would accept. But she stood her ground and he soon proposed marriage. He wasn’t quite sure how that came about but it all seemed to work. Felix found himself coming out of his shell and enjoying life – and Louisa. Of course when he realized he was losing himself and his control with her he rushes back into his shell and is even mean to Louisa. My heart just ached for both of them for most of this book. I wanted them to work but they each had to figure out how to do that before they could be happy. The writing was such that I just didn’t know how it would all get remedied in the end but it did – and wonderfully well.

I would definitely recommend this book as it was just incredibly enjoyable.