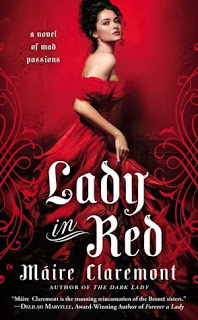 Lady Mary Darrel should be the envy of London. Instead, all society believes her dead. For Mary holds a secret so dangerous, her father chose to keep her locked away…and have a grave made for her near her mother’s. Driven to the edge of desperation, Mary manages to escape the asylum, only to find that her fate yet again rests in the hands of a man…

Edward Barrons, Duke of Fairleigh, longs for some way to escape the torment of his father’s crimes. In Mary’s warrior spirit and haunted gaze—which so mirrors his own—he finally sees his path to redemption. He will stop at nothing to keep her safe, even as she seeks revenge. But will the passion they discover in each other be enough to save them from their demons?

Mary Darrel was just 15 when her father put her into a mad house. There they treated her horribly, beat her, raped her – it was just a horrible place. She managed to escape and headed to the only person she could trust, Yvonne. Yvonne is a madam and was a good friend of Mary’s mother when she was alive. Yvonne takes her in and but they both know that she can’t stay at the brothel as that would be one of the first places that her father looked. She meets the Duke of Fairleigh and as he is so taken with her he agrees to have her as his mistress. He understands though that Mary has been hurt by whatever in her past she’s running from and that he can’t touch her. Little by little he begins to earn her trust and wants to help her in her revenge.

Eventually Mary is strong enough to take her revenge but now Edward doesn’t want her to do it. He fears that it has consumed her and though she thinks it will it will not make her happy. Edward makes Mary happy but he feels that he doesn’t deserve her and plans to let her go.

The relationship between Mary and Edward was a strange one. Yes, I saw the affection growing during the course of the story but I truly only saw the love on Mary’s side of things. Edward was definitely more possessive with Mary which was fine to a point but after a bit he was treating her like an object (at least in my eyes) and that really bothered me. Yes, he finally realized he loved her and we were given to think that that ownership would fly away into the sunset but I just couldn’t wrap my mind around it.

While the romance wasn’t the best, in my opinion, I thought the rest of the story was a good one. I really liked Mary’s strength in all things. When it came to escaping the mad house to crossing the country on foot and then planning her revenge. Though her hatred of her father got in the way I could see the determination underneath it all. Yes, she had some issues with being touched – who wouldn’t have after enduring all Mary had a the asylum – but other than that she was surprisingly normal for bring in a mad house for 3 years. The story flowed well and I was completely into it throughout the book. I like this series so far and hope that the good books keep coming.