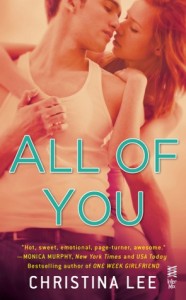 Reviewer: Tracy
All of You by Christina Lee
Series: Between Breaths #1
Also in this series: Before You Break, Whisper to Me, Whisper to Me, Promise Me This, Promise Me This, There You Stand, Two of Hearts
Publisher: Intermix
Publication Date: September 17, 2013
Format: eARC
Genres: New Adult
Add It: Goodreads
Amazon | Barnes & Noble | The Ripped Bodice | Google Play Books

Nursing student Avery Michaels wants nothing to do with dating—she’s perfectly happy single. Privy to too many of her mother’s bad decisions and even worse taste in boyfriends, all Avery can handle is a string of uncomplicated hookups whenever the mood strikes.

When she meets smoking hot tattoo artist Bennett, she wants him—for just one night. But he won’t accept a no-strings-attached arrangement. He lives by a straight-laced code of values based on his own troubled upbringing.

Bennett sees something special in Avery and he wants more from her. Way more. As Avery wrestles with her emotions for Bennett, danger and tragedy force them to open up to each other. And Avery must face the terrifying realization that she wants more from him, too.

So she needs to make a choice—let Bennett go or finally let him in.

Avery was attacked by one of her mother’s boyfriends when she was younger and since then she’s been kind of a player. She decided that she was going to bed guys on her own terms – not on theirs – and that she would never do the whole relationship thing. She saw how that worked out for her mom time and time again (read: it didn’t) and she doesn’t want to get stuck in one.

One night she has her eye on a real beauty of a guy but he doesn’t seem to notice her at all. She’s kind of…hurt because a guy has never denied her when she’s gone after them. She heads to her apartment and calls it a night. The next day Avery is on her way to work at a local convalescent home and she sees a new resident moving in – the guy that she had her eye on from the night before – Bennett. They talk but for some reason he still seems disinterested.

Soon after Bennett interrupts a guy from crawling into Avery’s downstairs apartment window and she ends up spending the night in his 5th floor apartment – feeling much safer. The two become friends but want to be more. Unfortunately they want different things. Avery wants no relationship and Bennett’s a virgin and only wants a long term relationship. The story tells of their friendship and relationship that is warm and loving but definitely full of tension and uncertainty.

I really liked this book. I started reading it on my phone’s Kindle app because I had forgotten to bring the print book I was reading with me to wherever I was going. I couldn’t put it down. Even after I got home I ended up finishing this book before I continued on with my print book.

Avery really sucked me in. She was so brash and bold on the outside and on the inside she was vulnerable and unsettled. She was so conflicted within her own mind it brought out corresponding emotions in me. I understood why she was like she was (only doing one night stands – except for her fuck buddy) but at times it bothered me that she was so ingrained in that train of thought that she took it a little too far.

Now Bennett we only got to see from Avery’s point of view but from what I saw I really liked. He was kind, loving, caring, strong (he took care of his family when his mother couldn’t) and steadfast. I wish this book had been in 3rd person POV so that I could have gotten into Bennett’s head! He was the kind of guy that Avery needed I liked just about everything about him.

The secondary characters I this book were great as well. Avery’s friends, Bennett’s siblings and the patient at the hospital that Avery worked at all added their own touch to the story and made it what it was.

I don’t think this is a book that should be missed.