Hi-di-ho neighbor!  How the hell are ya?

The past week zoomed by once again. I’m home today with a serious migraine. (I’ve got my laptop screen brightness so low it’s hard to see the darned thing – but it’s oh so good on the eyes and brain.)

The excitement of my week was getting this: 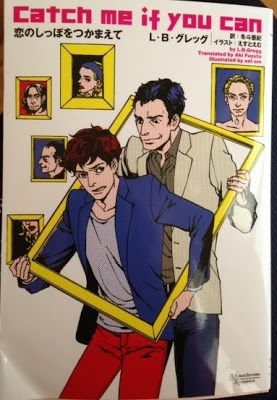 That’s Catch Me If You Can by LB Gregg…translated into Japanese!  So freakin cool!  It was such an awesome surprise to open my mailbox and find this.

I started off the week with All of You by Christina Lee.  This was a New Adultish book that had a nursing student and an artist in her building starting a friendship and then a relationship.  Avery only does one night stands, however, and Bennett is a virgin and only wants a long term relationship.  It made for a great story and it was pretty emotional for me. 4.25 out of 5 (read for Book Binge)

Next up was Lady Pirate by Lynsay Sands.  Valoree takes over her brothers ship when he is killed and the entire crew believes her to be a man (except 1).  After 5 years on the high seas she needs to claim her home and inheritance but the will stipulates she must be married and either have a child or be with child by the time she’s 25 – which is like 8 months away.  The crew who now knows her to be a woman sets out to get her married off and that’s when the fun begins.  Between face makeup made of cake batter, allergic reactions and fortune hunters it’s not easy trying to be a lady and find a man.  The story was fun, funny and touching. I really liked Sands’ historicals.  4 out of 5

Always on My Mind by Jill Shalvis is the story of Leah and Jack who have been friends for years and after a “fake” relationship fall in love.  The story was great and I loved it just like I have the other books in the Lucky Harbor series.  I’ll post my review later this week. 4 out of 5

Heart’s Truth by Tamsin Baker is an m/m story about a man who is out and proud and the younger man he falls for who hides the fact that he’s gay and that he’s with Marcus from his friends and family.  It’s a sweet sexy story that I really liked.  4 out of 5 (read for Book Binge)

Caught by Menace by Lolita Lopez is a sci-fi story about military men who “grab” their brides.  Menace is on the tail of one woman, Jennie, but Naya and Jennie have plans to get out their planet and not by being grabbed.  Naya saves Jennie but Naya is caught.  Menace and Naya end up starting to like each other but Naya’s past catches up with her and the two may be torn apart forever.  I really liked this book.  Yes, there was a ton and a half of sex but the story was very good and had me turning page after page.  4 out of 5

Last for the week was Lady in Red by Maire Claremont.  The story of Mary who was put into a mad house by her father, escapes and wants revenge on her father.  The man who helps her loves her, though he denies it, and soon realizes that Mary just might ruin herself if she goes after the revenge she seeks. Not a completely fulfilling romance but I like the rest of the book. 3.75 out of 5