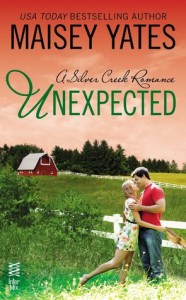 After spending another family wedding fielding questions about her non-existent love life, Kelsey Noble decides she’s tired of waiting around for things she could go out and get herself. What Kelsey wants is a baby, and she doesn’t see any point waiting for a husband she’s not even sure she wants. But a mix-up at the fertility clinic lands her with a hassle she didn’t count on. A big, muscular hassle in a Stetson and cowboy boots.

Cole Mitchell is shocked to discover that a grand gesture from years past has come back to haunt him. Now, thanks to a clerical error, a woman he’s never met is having his baby—and there’s no way he’s going to walk away and forget he has a child.

Trying to make nice with the unexpected father of her baby lands Kelsey in Silver Creek, Oregon, dealing with the kind of small town life she left behind years ago. Even worse is dealing with the burning attraction she feels for Cole. She knows adding sex to the mix is a very bad idea, but she’s not sure how long she can resist falling for the last man she ever expected…

Kelsey is in her 30’s and wants a baby. She was engaged at one time but after finding her fiancé in their bed with another woman that ended quickly. She decides to have in vitro fertilization and she’s excited about the prospect of being a mother. It scares her thinking about what her mother will say when she finds out but she’s determined to do it on her own. That’s until Cole Mitchell shows up on her doorstep.

Cole had been married at one time and it was not a happy marriage. He tried to placate his wife on many fronts and freezing his sperm so they’ll optimum results (he wasn’t ready to have children then – probably because it was with her) was one of the concessions he made. Now that he’s no longer married he heads to the sperm bank to have his sample disposed of but is told that there was a mix up and his sperm was used. He manages to get the info on the woman who used them and heads to her house. He knocks on the door and there’s Kelsey. Cole’s not sure how he feels about being a father when it wasn’t planned and it wasn’t with someone he loved but he wants to take care of Kelsey as she’s horribly sick. He takes her to his ranch so that they can get to know each other.

Kelsey and Cole aren’t quite sure what to do with one another. Kelsey is kind of pissed that this man has intruded on her life but the more he’s around she realizes that she’s glad. Both Kelsey and Cole start having stronger feelings for each other than planned but when Cole asks Kelsey to marry him – strictly for convenience sake, she turns him down flat. He’s determined to get her to marry him and she’s determined to not do something foolish – like marry a man she’s in love with but who doesn’t love her in return.

I was excited when I received this book for review as it sounded pretty darned good. I was surprised at how the author set up the story. The fact that the fertility clinic got things mixed up wasn’t too much of a surprise although I’m sure this happens rarely. The part that surprised me was that the hero found out the info by just pushing the receptionist out of the way, looking at the computer and printing out the info. I know this is fiction but I like at least a modicum of believability in my contemporary romances. If this was a paranonormal romance I probably wouldn’t have blinked an eye.

Anyway, despite how Kelsey and Cole came to know each other I liked them together. Kelsey had her own snarky sense of humor and Cole meshed with that well even though he was a more uptight person in general. Their banter was amusing and kept me smiling throughout the book. Their romance was sweet but I thought that Kelsey’s “I love you” came kind of out of the blue. She was determined to keep Cole at arms length but then slept with him. We had been privy to her inner thoughts so I felt the author should have given us at least some clue that she was feeling more than lust, horniness and some affection. With Cole he had been hurt so much by people – his ex-wife and his father that he was scared to love again – I certainly didn’t blame him. The fact that he overcame his hesitance so quickly was both good and bad. I guess I’m always surprised when someone says that something like “I’ve loved you for a long time now” when even that person wasn’t aware of it. IDK, it just didn’t sit square with me.

Despite the niggles that I had with the book I liked it. The humor and the secondary characters, along with the romance, helped to make this an entertaining read.