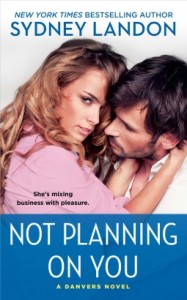 Suzy Denton seems to have it all together. She loves her job as an event’s planner for Danvers International, and she loves her high school sweetheart and fiance Jeff. Fast forward a month and it’s all gone to hell in a hand-basket. She finds out Jeff’s dentist has been doing more than drilling his teeth, and Danvers is in the process of merging with Mericom creating the largest communications company in the US and also bringing Gray Merimon, the CEO of Mericom into her life.

Gray pursues her from almost their first meeting. Even though he looks like sex on a stick, Suzy is afraid of being hurt again, and she thinks Gray is just another stuffed shirt looking for a relationship. When he calls her bluff, Suzy agrees to one night of sex, hoping that he will be terrible in bed and she can finally get him out of her system.

When circumstances throw them together for more than one night, can Gray convince Suzy that two complete opposites can be a perfect fit?

Gray has had feelings for Suzy for a while but Suzy isn’t interested – at least that’s what she tells him. She’s secretly got the hots for him as well. When he moves to Myrtle Beach (where she lives) he’s determined to get her permanently. The most that Suzy agrees to is a date. When they’re on the date, however, they come to the conclusion that they should just sleep together and get the itch out of their systems. Of course Gray is just humoring Suzy as he has no plans to let her go. Unfortunately before they can go far an unfortunate accident has Suzy laid up with a broken ankle and lots of scrapes, bumps and bruises. Gray sets her up in the house he buys for them and Suzy finally admits she loves Gray. They are on their way to their HEA when a woman from Gray’s past stirs up trouble and has Suzy doubting in their “meant to be.”

In this story we don’t have romance so much as Suzy seeing what a wonderful person due to his actions and the care he takes of Suzy while she’s laid up. He really is very sweet and even I was impressed with his devotion. Suzy is reluctant to admit her feelings at first because of her previous boyfriend who cheated on her but even she sees that she held herself back from that relationship. She eventually finds that she wants to give Gray everything.

Then there was Reva. Reva was a girl who Gray went on a couple of dates with and then slept with while he was trying to tell himself that he really didn’t want Suzy. This was BEFORE they started dating but Reva has been stalking him for months. After Suzy finds out about it she decides that they are going to get rid of Reva together. When they see her though she says that the baby bump she’s sporting it Gray’s. He’s floored and Suzy leaves him in Charleston to deal with Reva as she thinks he needs to think things over. Now, I’m not saying that this was a bad idea but I thought that Gray needed to show more attention at that point to Suzy than to Reva. Yes, he should have shown concern for her – especially if she actually was having his child but the way he treated Suzy after that pissed me off so badly I had a hard time with it. After the tenderness and devotion he’s shown Suzy before, the fact that he actually blew her off later in the story (his claims that it was too late at night was complete BS to me) put him in the major doghouse. The eventual explanation from different characters was just not enough for me at that point.

The story was cute and a decent read but unfortunately had a hero I couldn’t love and that brought the rating way down.

Guest Review: Fall For Me by Sydney Land