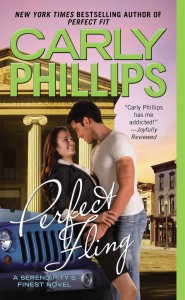 Erin … The Good Girl
Assistant District Attorney, Erin Marsden, is Serendipity’s quintessential good girl. The only daughter of the ex-police chief, she has never made a misstep, content with her quiet, predictable life … or so she thinks. Until Cole Sanders returns to town with heated interest in his eyes and shadows in his past.

Cole … The Bad Boy
After seven years of deep undercover work in New York City, Cole returns to Serendipity to help his aging father and to find his moral compass once more. Not to get involved with wholesome Erin Marsden. Even as a rebellious teen, he knew a girl like Erin was off limits and that hasn’t changed. But neither one of them can resist their off-the-charts chemistry and a one night stand brings complications neither Erin nor Cole expected.

The Attraction … Off the Charts!
Then Erin’s current case plunges her into a killer’s crosshairs. With more at stake than anyone knows, Erin succumbs to Cole’s take-charge attitude. As a bodyguard, he’s the best. As a lover, he’s even better. But there’s more than the matter of Erin’s safety at stake. And Cole must forgive the sins of his past and prove to himself – and to Erin – that he’s capable of the love and the forever she – and their baby – desperately need.

This is the second book in the Serendipity’s Finest book and it features Mike’s (from Book 1) younger sister, Erin.  At Mike and Cara’s wedding, Erin was feeling lonely and didn’t want to go home just yet so she found herself at Joe’s bar after the wedding, getting pretty cozy with Cole Sanders.  The guy that she used to have a huge crush on back in the day.  They agreed that it was going to be a one night deal and Cole kept his word on that.  Even though he can’t stop thinking about her and even though she can’t get that night out of her head.

Things get interesting when a few months later, Erin finds herself…in a situation where Cole will probably be in her life forever.  On top of that situation, she finds herself being stalked, shot and under the protection of the very guy that she’s trying to stay away from.  She knows that she’s in for a world of hurt because even though the chemistry between Cole and Erin, Cole is still adamant about returning to his life once Erin is safe.  But the longer they stay together, the closer they get and the harder it is to imagine life without the other.

I really like this series.  I like the characters, the small town of Serendipity and in this book, I really liked getting to know Cole and Erin.  Their story was cute and I zipped right through it.

Erin was a great heroine too.  She was a lady on the streets but a freak in the sheets and Cole was addicted.  She was an all around good person and she was interesting too.  She had a great support system in her family and in her friends.  I loved how she stuck up for Cole at every turn and she didn’t care who she was tearing down in defense of her man.  She was great for Cole and he was great for her.  And seriously, I thought the title fit the story perfectly.  More often than not, the title of the book that I’m reading doesn’t really fit the story but that wasn’t the case with this one.

This was solid contemporary story and I’m glad that I read it.  I’m looking forward to Sam’s story even though I rolled my eyes when I found out who his love interest was.  Still, it’s a Carly Phillips so I’m going to read it.  I definitely recommend this book.

This book is available from Jove.  You can buy it here or here in e-format.  This book was provided by the publisher in exchange for an honest review.