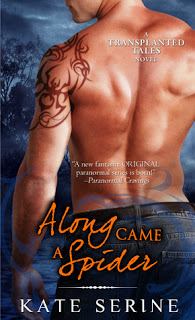 When Trish Muffet is attacked at a grisly crime scene, the last person she expects to come to her rescue is Nicky “Little Boy” Blue. But since walking away from everything two years before, Nicky’s been doling out vigilante justice as “The Spider,” taking on the vicious predators of the night in hopes it’ll lead him to his ultimate target – Vlad Dracula. And he needs Trish’s help.

Although Nicky’s renegade style goes against everything Trish stands for, she’ll do what she must to bring Dracula down. With danger stalking her, Trish knows the only person she can count on is the one man who has the power to leave her breathless. There’s no way she’s letting this spider frighten her away…

Trish Muffet works for the FMA – the Fairytale Management Authority – and is just leaving a crime scene when she’s attacked by vampires. She kind of gets her butt kicked but is saved from certain death by Nicky Blue. He is masked but something he says tips her off that it’s him. He ends up asking for her help to locate Dracula. He’s been acting as the vigilante called “The Spider” for a while on his own but now he seeks out Trish’s help trying to find Dracula – the man who killed his wife, Juliet (yes, Capulet). Trish agrees and while they’re on the case the connection that they felt upon meeting (over 100 years before) just gets stronger.

Trish has been in love with Nicky since she met him. She has a gift for seeing into people’s souls and when she looked into his she saw all of the love he was capable of giving. Nicky, it’s insinuated, fell in love with Trish at that moment as well and has lived his life thinking about her. Unfortunately there are forces out to separate the two but Trish isn’t letting Nicky go this time.

I have to say that there was a lot going on in this book but it didn’t feel overwhelming. Dracula was up to a lot of mischief with different people and a group called The Agency (kind of Men in Black types) was giving the FMA and all of the Tales grief. Add on top of that the relationship between Nicky and Trish and you’ve got a three layer cake. Lol

I liked the relationship between Nicky and Trish for the most part. They started sleeping together pretty quickly but they’d known each other for many years. I thought Nicky was very sweet to Trish and loved seeing his softer side. There wasn’t a whole of romance per say but the relationship was built in nicely with the other parts of the story and it all seemed to fit with the characters personalities.

I think the whole idea of fairytale characters, nursery rhyme characters and characters from literature all coming over from Make Believe into our world (which they call the Here and Now) is just a fun idea. The misconceptions of the characters based on their “tales” that were written are amusing to uncover and I think that SeRine does a nice job of it. I look forward to reading more in this series.

2 responses to “Review: Along Came A Spider by Kate SeRine”