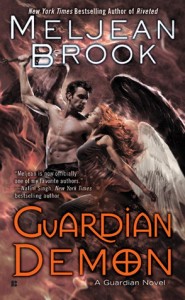 After a terrifying encounter in Hell destroys her trust in Michael, the Guardian’s powerful leader, former detective Andromeda Taylor is ready to call it quits as one of the angelic warriors and resume her human life again. But when demonic forces threaten her closest friends and she uncovers a terrifying plot devised by Lucifer, Taylor is thrown straight into Michael’s path again…

Andy needed to recover after putting Michael’s soul back in his body. After that she find that her thoughts on being a Guardian have changed. She is so pissed at Michael she can hardly see straight and wants nothing to do with him. Since Andy is a novice once again, now that she’s no longer carrying Michael around in her head, she has to train. Andy just wants to Fall – be a human again. She thinks this Guardian stuff sucks and wants nothing to do with it. Of course Lilith tells her that she’ll be under the tutelage of Michael. Gah! Andy being Andy she lets her temper flare and then once she’s vented she’s over it. There’s too much to do.

A politician that is a friend to the Guardians shows up on a video exposing Special Investigations (the Guardians) and then is killed on tape by a vampire. The Guardians know that it was a demon in the politicians skin but they have to find out what happened to the real guy and the reasons behind it all. This leads them to the realization that Lucifer is on the war path – more so than normal. They have reason to believe that Lucifer will break through into Chaos from Hell and then open a portal to Earth. The Guardians must stop him in his tracks.

While all of this is going on Andromeda (that’s how Michael refers to her) and Michael are getting closer and closer as they work together to solve the puzzles. Michael loves Andromeda but doesn’t believe that she loves him. This is why when he knows he won’t be around for much longer he doesn’t believe she will grieve – boy would he be wrong. Lots of problems need solving and all the Guardians have to work together to defeat Lucifer.

Where do I begin? I can’t tell you too too much about what happens in the story because it will just spoil it and finding out new info on each page is half the wonder of this book. The other wonder is Meljean. She is freakin’ amazing. I’ve loved her books since I started reading her work but this one? This one takes the ultimate cake. I loved every word and couldn’t get enough of it. I wanted to just sit and read with no interruption but unfortunately life didn’t work that way but even reading if over time didn’t diminish the impact of this book and that is a true testament to how well this woman writes. Her characters have a depth to them that we don’t see all too often and I love the humor and the humanity she puts into these paranormal characters. I could go on and on but I’ll stop. lol

The story was amazing. Andromeda and Michael were awesome – whether they were at loggerheads or falling into each others arms they were individuals that made their lives and the lives around them even better when they were together. I thought they were truly perfect for each other and though I didn’t that with the books leading up to GD, Brook made me an absolute believer.

The secondary characters, the love, the fight scenes – everything was so well done, I just can’t say that enough. I cried a couple of times during the book as it was so emotional and that’s not something I do easily.

Let me just say that if you haven’t read this series yet, why the hell not? Get on it NOW! If you have been reading the series over the years let me be honest (and loud) with my opinion – this is a book that you DO NOT WANT TO MISS – READ IT!