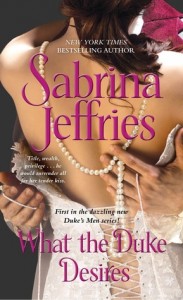 Maximilian Cale, the Duke of Lyons, long ago buried his grief for his missing elder brother, Peter, who was presumed dead after being kidnapped. When a mysterious note arrives from Tristan Bonnaud asserting that the Duke’s brother is alive, it leads Max straight to the winsome Lisette Bonnaud, illegitimate daughter of a viscount and Tristan’s sister. Soon he and Lisette are traveling to Paris posing as husband and wife, in search of Tristan, who has disappeared. And the longer he spends with Lisette, the easier it is for Max to see that the line between dukedom and desire is easier to cross than he imagined…

Lisette Bonnaud and her brother Tristan are the illegitimate children of a viscount. When their father dies their oldest half-brother, George, throws them out of their home the next day and put a warrant out for the arrest of Tristan, stating that he stole a horse. The family moves back to be with their mothers family in France. Lisette doesn’t return to England for 12 years and when she does she starts to work with her other half-brother, Dominic, in his investigation business.

When the Duke of Lyons shows up demanding to see Dom because of something that Tristan supposedly did Lisette is at attention. She knows that Tristan wouldn’t have returned to England because of the warrant this is still out for his arrest, but she can’t deny that the letter that the duke received is in Tristan’s handwriting. She talks the duke into traveling to France to find out Tristan’s whereabouts from his former employer.

They are to travel as siblings but right as they’re to board the coach Dom’s neighbor recognizes Lisette and the duke, Max, comes up with the story that they are newly married. Since no one knows Max is a duke this seems like a viable option – except now they have to share a room together.

The couple does the best they can but frankly the sexual tension arcing between the two of them could light up a small city. They manage to keep their hands to themselves for…well, not that long but when they do come together it’s amazing. Of course Lisette knows that the duke can never marry a bastard like her but Max actually wants to – with stipulations. You see Max’s father and great-uncle both went mad and Max believes that this is hereditary and that he too will go mad eventually. Lisette agrees to marry him but only if he will let her take care of him when the time comes. Max won’t agree so they’re at an impasse.

This was, as usual, a good Sabrina Jeffries novel. I really liked Max a lot and felt so bad for the life that he had led. First with his brother getting kidnapped and then his parents obviously keeping secrets from him ThEN the fact that he may go mad sitting on his shoulders. He’s had a very emotional time of it. For him meeting Lisette was a breath of fresh air. Being the daughter of an actress and of course the bastard daughter of a viscount she really had to learn throughout life to not take what everyone says to heart. Max isn’t used to the straight forward approach that Lisette takes to just about everything but it’s something he really needed in his life. Not being kowtowed to was something incredibly new for Max. Their relationship was quite honest – not too much hiding behind themselves – just being up front with everything, and I liked that.

The different characters brought in made me think of other books that will be coming in the future and I’m certainly looking forward to Dom’s book as I really liked him – even though he wasn’t in the story all that much. Overall another great romance from Ms. Jeffries.