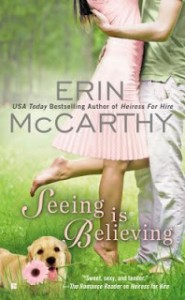 Cuttersville, Ohio is full of ghosts, and they all want Piper Tucker’s help.
One guy in town just wants Piper.

Ever since Piper Tucker was young she wanted to be like everyone else, but her uncanny ability to see ghosts always put her on the other side of normal. And the apparitions are showing up now more than ever, desperately seeking help. But what can she possibly do for them? They’ve already been dead for years. Besides, she has a personal concern of her own right now. A real flesh and blood concern—named Brady.

He’s Piper’s childhood crush, and no sooner is he back in town than sparks start giving off heat. For Brady, it’s hard not to notice the sexy young woman Piper’s become, or forget the special gift she had as a girl. And right now it could come in handy, because a long-forgotten murder has been keeping a restless spirit from finding peace. All Piper and Brady have to do is solve the crime to put the specter to rest. But the passion brewing between them is just as restless, and could prove twice as dangerous.

Piper Tucker is babysitting her friends Shelby’s kids when Shelby’s cousin Brady comes knockin at the door. Piper, who once had the crush of all crushes on Brady, is a bit flabbergasted but manages to get it together and have a nice evening with him. Then she drops her robe and they do the nasty on Shelby’s bed. Lol

Brady has come back to Cuttersville because he lost his job and he needed to see family. He’s not sure where that compulsion came from as he hadn’t been back to his hometown in 12 years but he’s happy he did, especially because of Piper.

Piper and Brady start what they think of as a few week affair but soon they both realize that there’s more to what they’re doing than sex – it’s a relationship and they both want to see where it’s going. There are some issues though….the townspeople point of views as well as their families, Pipers insecurities and the ghosts that Piper can see and seem to want Piper and Brady apart.

This is the 3rd full novel in this series and it was a good one. In the story it’s been 14 years since the last book (in real life only 6 years) and I loved seeing Piper all grown up. She had had a horrible childhood up until she was 8 years old and started living with her father. She still felt like a misfit after that though and Brady makes her feel like she’s normal, which she loves.

Brady isn’t sure what he wants out of life, truth be told. He was in a job he hated but it paid the bills. He’s not broken up about losing it, just the paycheck. When he impulsively decides to stay in Cuttersville it makes him so happy. Piper made him happy as well. He was content and complete when he was with her and I loved seeing them together. In this story we also get to see Shelby and Boston as well as Amanda and Danny who were in previous books and seeing them established and still so much in love was lovely.

Overall this was a great book and I definitely recommend it.